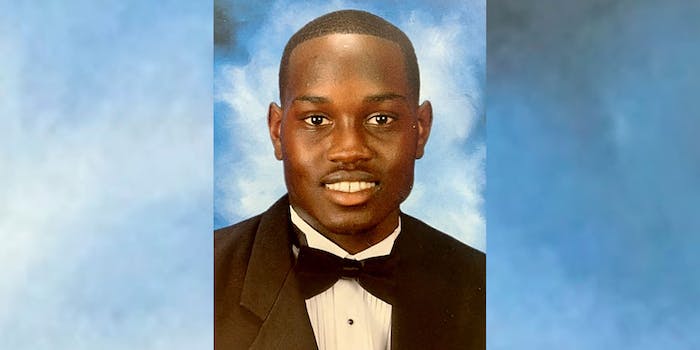 The smear campaign against Ahmaud Arbery has already begun

It's Trayvon Martin all over again.

Right-wingers have already latched onto a smear campaign against Ahmaud Arbery, the Georgia man whose killing sparked outrage and a fresh debate about racism.

A video of the killing appears to show white men targeting the young Black man and shooting him in broad daylight in the street.

In the afternoon on Feb. 23, Arbery was jogging through a neighborhood on Georgia’s southern coast. Gregory McMichael and his son Travis McMichael grabbed guns and followed him in a truck.

After they confronted him, a scuffle ensued in which Arbery was fatally shot. He was unarmed.

The McMichaels remained free for months. They claim the killing was justified because they suspected Arbery of a recent burglary, and that Arbery initiated the physical altercation. Prosecutors have not released any evidence that Arbery was involved in any burglaries.

Earlier this week, a cell phone video surfaced showing Arbery jogging around the truck and disappearing from view with the younger McMichael following, shotgun in hand. Seconds later, they reappear in the midst of a scuffle. Shots ring out. Arbery died at the scene.

Amid widespread public outcry, days after the video’s release, the McMichaels were charged with murder and aggravated assault.

Arbery’s mother, Wanda Jones, told CBS the video proves her son was murdered. “He was out for his daily jog and he was hunted down like an animal and killed,” she said.

Right-wing troll Andy Ngo wrote an entire thread attacking the slain young man. He argues that Arbery deserved to be killed because he has a minor criminal history.

In 2013, when Arbery was a teen, he brought a gun to school, Ngo said. He also pointed out that Arbery was convicted of shoplifting in 2018, which served as the basis of a probation violation stemming from the previous sentence.

Liberty Hangout, the extremist, wannabe version of Turning Point USA, is also attempting to vilify Arbery. The home of Kaitlin “gun girl” Bennett thinks the media should be using his mug shot photo in its coverage of his death.

Liberty Hangout also likened the case to that of Trayvon Martin, the unarmed Black teen whose 2013 slaying sparked the Black Lives Matter movement.

Others have compared the cases to one another as examples of racism against Black people. But in Liberty Hangout’s view, the real injustice is that the media went out of its way to portray Martin in a positive light.

Numerous other conservatives have latched onto the narrative the Arbery deserved to be gunned down in the street.

The maligning of Arbery sparked outrage.

“Very interesting. What other crimes do you think warrant being chased down by random hicks with guns and shot to death in the street?” Slate writer Aymann Ismail replied to Ngo.

“Damn I didn’t know it was legal to murder criminals,” @Enderpon2 commented on Liberty Hangout’s thread. “Liberty but only for white people,” said another.

It is not yet known how the McMichaels have pled to the charges.