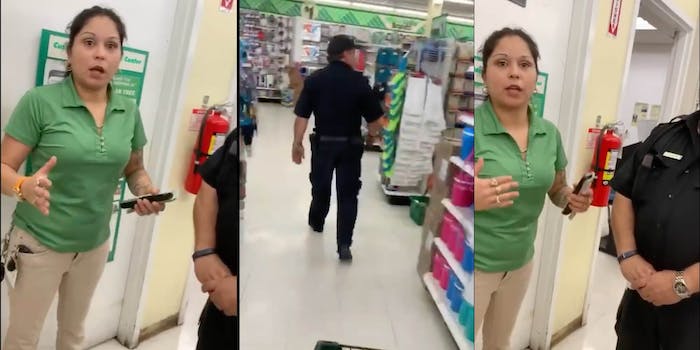 The woman says she was speaking Somali on the phone.

A Black woman was asked to leave a Dollar Tree in Texas after customers complained that she was swearing in the store, a video shows.

Roda Bashe, a Ph.D. student, wrote in a May 6 Facebook post that she was speaking Somali to her sister on the phone while shopping when she noticed someone staring at her “suspiciously.”

A video that Bashe shared to Facebook shows a security guard approaching her and saying the store manager asked him to ask Bashe to leave. Bashe requests to speak with the manager and says she doesn’t understand why she was asked to leave for speaking Somali.

“This is absolutely racist and this is harassment, as well,” Bashe says in the video. “You’re asking me to leave the store for doing nothing wrong.”

In the video, the store manager says that customers told her that Bashe was using profanities. Bashe tells her that the customers were lying and asks if the manager saw it for herself, to which she replies that she did not see it happen.

The manager says that she tried to approach Bashe about the complaints but Bashe said: “Not today.”

“I said ‘not today,’ exactly,” Bashe says. “I don’t feel like dealing with racism today.”

Bashe asks if she could continue shopping without being harassed, and the manager asks her to leave the store.

The video has over 3,700 views on Facebook and accumulated over 180 shares.

Bashe said in a May 6 Instagram Story that the incident happened “a while ago,” but realized that she was “more emotionally affected by what happened” than she realized.

“Swearing as a 29-year-old woman is not illegal,” Bashe said in an Instagram Story post. “I was not swearing, I was speaking Somali. But even if I was swearing, how is that an issue? How can I not talk on my phone and swear as a grown ass adult?”

“I was tongue-tied and I was literally shivering,” Bashe said on Instagram. “And I felt like I didn’t say all the things that I needed to say in that moment because it’s very jarring experiencing racism.”

Bashe said she was lucky enough to leave the store unharmed but that some Black people are not as lucky.

“So often those same exact situations happen and the Black person does not get to leave unharmed,” Bashe said. “They’re either jailed or beaten, and sometimes it ends in tragedy like death.”

Bashe, who did not immediately respond to the Daily Dot’s request for comment, said she will seek retribution.

“I experience racism all the time,” Bashe said on Instagram. “Stuff like this and far worse happens to me all the time. I just happen to have it on camera this time, and I will pursue it.”

The Dollar Tree did not immediately respond to the Daily Dot’s request for comment.