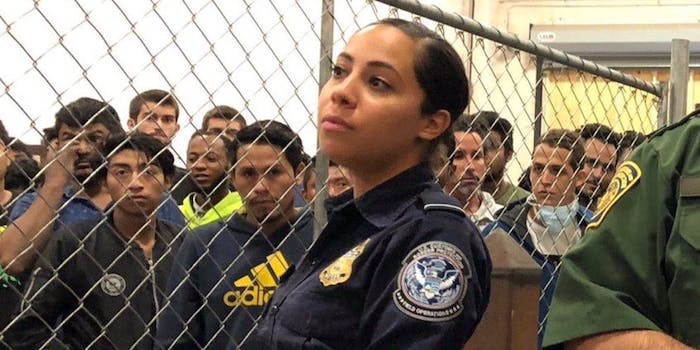 The web’s most recent obsession rose to internet stardom overnight.

A woman reportedly named Kiara Cervantes and reportedly a Border Patrol officer based in Texas found herself at the center of a new viral hashtag on Monday night. After a photo of a uniformed Cervantes providing security for Vice President Mike Pence appeared, the hashtag #ICEBae began trending, according to Yahoo. Comments about Cervantes’ looks quickly flooded the web but warred with negative comments from users who criticized the Latina guard for working within President Donald Trump’s ongoing immigration crackdown.

Despite the name, she reportedly works for the U.S. Customs and Border Protection and not the U.S. Immigration and Customs Enforcement (ICE).

“I think I’m coming down with a case of undocumentation,” one Twitter user wrote in response to the image. Many people seized upon the officer’s viral photos, circulating images of her with memes and Trump criticism.

Not all the positive responses were focused on Cervantes’ looks. Though many people seized on her appearance, several Twitter users stepped in to support Cervantes’ assumed politics as well as her service. “#ICEbae is a latina (sic) hero that knows about the factual dangers of letting in illegals,” one user wrote. “Thank You for your service.”

While some people continued to thirst after the officer, many Twitter users criticized Cervantes for participating in Trump’s widely criticized border policies. Practices like separating children from their families at the border quickly became a topic of division.

“#IceBae is such a cute name for someone who puts black and brown children in cages,” one user wrote.

#IceBae is such a cute name for someone who puts black and brown children in cages.

We really will have to leave some of you behind.

Families are trapped in literal concentration camps and there are mountains of video/photo/written evidence of this, and the one thing y'all took from it was that a fucking ICE guard was attractive.

Others were busy comparing Cervantes and her fellow border officers to Nazi soldiers.

Following Cervantes’ abrupt rise to internet stardom, the officer apparently created a Twitter account to confirm her identity. “Soooo it’s crazy…. but here I am,” she wrote. “I’m hearing something about a viral picture. I would like to say i (sic) was just doing my job. Providing security for the visit of @VP. It was an honor and I take a lot of pride in my job!”

Not long after her Twitter page was up and running, Cervantes also released a video. “So I literally just woke up, went to get something to eat and saw that I needed to make a video so you all could believe that it’s me,” she said. “It’s me. I’m a customs officer based in Texas.”

Soooo it’s crazy…. but here I am. I’m hearing something about a viral picture. I would like to say i was just doing my job.. providing security for the visit of @VP
. It was an honor and I take a lot of pride in my job!

#IceBae Kiara Cervante created a Twitter account, which already has 12K followers, and posted a video introducing herself https://t.co/1SY5RNNGnK

Cervantes’ Twitter account already has more than 30,000 followers. Her tweets so far—which consist of an introduction, a photo, the video, and a message to users—have all received thousands of retweets and likes. Her internet fame likely won’t last more than a few days, but with her new social media page we may end up with a lot more #ICEbae in the future.

Cervantes did not immediately respond to a request for comment.