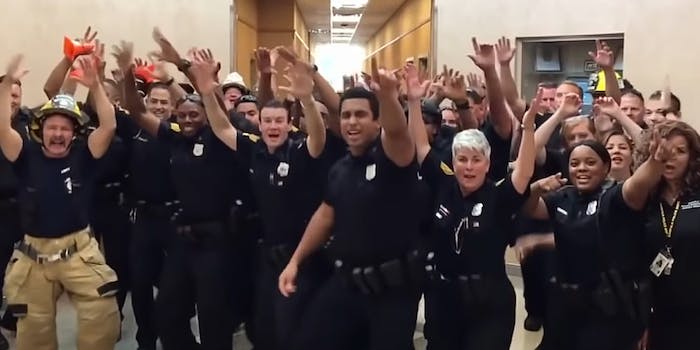 Don't let the literal song and dance fool you.

If you are Facebook friends with conservative family members or co-workers, you’ve probably seen it in your feeds: Videos, photos, and news clips of police officers dancing, praying, or handing out free food. Just last week, a video of cops lip-syncing to “Uptown Funk,” while grooving through their station, went viral. While this all might seem like harmless fun, the internet has a word for this kind of media: copaganda.

Not that it doesn’t make sense for police to film and promote videos like this. In the era of Black Lives Matter and body cameras, law enforcement is understandably looking for a PR bump. What is less understandable is why every one of these videos is picked up by news outlets large and small, then spread across social media like wildfire.

In recent days, police officers, like the ones in Norfolk jamming to Bruno Mars, have been making videos and releasing them online as part of a nationwide “lip-sync challenge.” As challenges are wont to do, this one made the Twitter, Facebook, and YouTube rounds. Some garnered so many views that the New York Times felt the need to run an article about the contest. The “Uptown Funk” video, with hundreds of thousands of views, is so popular, it has been shared by numerous major media companies.

While the challenge was going viral, another headline was being made: Chicago officers had shot a Black man, Harith Augustus, in the back, sparking a wave of protests in the city. While the timing of the two stories was a coincidence, the making of these videos was not unintentional. They are carefully planned propaganda made to get at least as much media coverage as the bad stuff does.

Police officers have admitted as much. To quote the Times: “‘It is allowing the country to see us in another way,’ said Corporal William Pickering, a public information officer with the Norfolk Police Department, which created the ‘Uptown Funk’ video. ‘We aren’t all robots.’”

And it worked. Again, from the Times:

“The video from the Norfolk Police took off online after it was released on July 9. More than 191,000 people commented on the department’s Facebook page, most of the remarks supportive. The actress Sharon Stone gave the department a shoutout on Twitter. Fans sent the officers cheesecake. And the stars of the video held a meet-and-greet, giving the first 100 people to arrive a signed photograph.”

Lip-sync challenges aside, national news outlets run copaganda all the time. BuzzFeed has pushed out “This abandoned dog was adopted by an entire police association.” At CBS, you can find “Police officers and K9s join boy with tumor to pray before his brain surgery.” And over at Fox News, there’s the hard-hitting journalism “Police officers help out 9-year-old’s lemonade stand after he was robbed.”

It’s hard to understand why national outlets find content like this to be newsworthy. People, even businesses, adopt rescue dogs every day; lemonade stands unfortunately get robbed. These acts, while kind, are not remarkable. Meanwhile, local papers are folding incessantly and big city papers announce new billionaire owners who then announce massive layoffs with enough regularity to make any professional writer suspicious of an Illuminati conspiracy. And yet it seems that outlets of every size have the bandwidth to do PR for the police.

Why do media companies do it?

Working in digital media, we understand that feel-good stories get clicks. The Daily Dot covers our fair share of “actor in Marvel movie visits hospital” stories. And to a certain aging (white, conservative) segment of the Facebook population, police and the military are a version of movie stars and superheroes. The clicks are there. While an outlet like Fox News has an ideological motivation, BuzzFeed is likely just covering these videos because they know they drive traffic.

However, while an article about Robert Downey Jr. visiting a child dying of leukemia doesn’t have an impact on the public perception of criminal justice, copaganda does. If a disproportionate number of articles about the police engaging in “random” acts of kindness pop up in your feed, while stories about police corruption or abuse are suppressed or go uncovered completely, the public perception of the police eventually looks far different than the reality.

If the only image you ever see of cops is them lip-syncing to Bruno Mars, that’s going to affect the way you view the next story you see about police shooting an unarmed Black person.

The police are winning this PR battle and they are using it to fight against the gains of activist groups. Blue Lives Matter bumper stickers and flags are adorning cars and hanging from houses across the country. The energy behind this ill-named movement has led to the introduction of “Blue Lives Matter bills” on a local and national level. These bills criminalize protest and exacerbate the very racial inequalities that the Movement for Black Lives is trying to fight in the first place.

The Protect and Serve Act, which made it to the floor of the House of Representatives in May, is a perfect example of just how pernicious these bills can be. The legislation would functionally make police officers a protected class, rendering charges like “assaulting an officer” hate crimes. As we’ve seen across the country, protesters are often saddled with trumped-up charges; many fear a bill like this would functionally criminalize protest.

In a piece about these laws—which have already been passed by several states—the Intercept’s Natasha Lennard explains its larger implications:

“By explicitly modeling their bill on existing hate crimes statutes, the Senate has denigrated the very notion of persecution. Treating cops as a persecuted minority equates a uniform—which you can take off—with skin color, religion, gender, or sexual orientation. And as the Blue Lives Matter bills’ sobriquet suggests, this legislation is a direct a response to anger over the actual—if not quite legally defined—hate crimes against black people, perpetrated by those in blue.”

At first glance, it might feel like a stretch to argue that videos of police officers breakdancing lead to legislation like this, but proposed bills are made and broken in the court of public opinion. If law enforcement officials are presented to the public as the smiling faces behind viral memes and lip-sync battles while their victims are described as “thugs,” “demons,” and monsters, then the media is doing the work of right-wing reactionaries for them.

The police officer said it to the New York Times: These videos are meant to encourage the public to see law enforcement in “another way.” This means that they are meant to shift the conversation away from police brutality and deny the grievances of its victims.

Copaganda is by no means a new phenomenon. In 2016, media critic Adam Johnson outlined the eight most popular types of copaganda in media. While he discussed issues like “pinkwashing” (playing up the LGBTQ friendliness of the police force) and the smearing of victims of police violence, two of the items he mentioned, “saving kittens” stories and “Christmas gift surprise” stunts, are age-old versions of what we’re seeing today.

Copaganda is so old, you can find it in Nick at Night reruns. The media has been regurgitating police PR since the days of Andy Griffith, and now in the era of Brooklyn 99, it is just being used more often and more effectively.

What are we going to do about copaganda? It’s not necessarily practical to burst the bubble of your Blue Lives-loving grandmother the next time she shares a video of “Cop Pool Karaoke” (we regret to inform you we didn’t make that up), but one step we can take is actively recognizing that these videos don’t exist in a vacuum.

These videos are part of a carefully orchestrated PR campaign, and like any branded content, you can choose not to click on it or hide it from your feed.