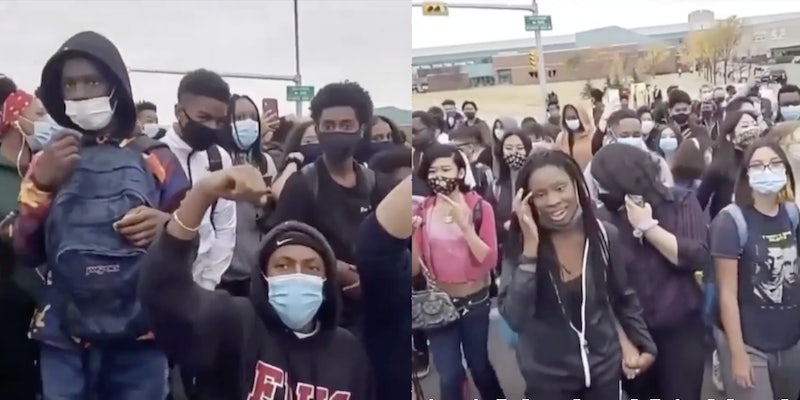 The students who recorded their principal using the slur were suspended.

The protest originated at Bishop McNally High School, with dozens of schools across the city following suit. On the morning of Oct. 8, hundreds of students walked out of their classrooms to demand more from the Calgary Catholic School District when it comes to addressing racism in its schools.

A video of the student-led protests went viral Thursday, eventually making its way to the r/PublicFreakout subreddit. There, it has collected more than 18,000 upvotes and a slew of supportive messages for the students.

The first incident happened two weeks ago at St. Michael School, where students secretly recorded their principal, Lianne Anderson, using the N-word. The recording circulated rapidly but resulted in suspensions for the four students involved. The school board said the students were suspended for violating the student code of conduct.

The second incident happened within the last two years at Bishop McNally, but the recording only recently began circulating.

The district has apologized for both incidences, claiming it strives to create “welcoming caring, respectful and safe learning environments” in its schools, according to CBC news.

In an emailed statement to CBC, chief superintendent Bryan Szumlas noted that specific issues can’t be openly discussed due to privacy concerns. He added, “We apologize and our hearts go out to any student or staff member ever impacted by systemic racism. We take every situation seriously and will investigate each individually to ensure a positive outcome that aligns with our faith.”

Alberta Education stepped up to support the students, telling CBC that situations like this are unacceptable.

“Period. We do not condone it. And frankly, it shouldn’t come as a surprise to anyone in the education system that this is completely unacceptable and inappropriate,” press secretary Colin Aitchison told CBC in an email. “It is our expectation that the school division will take steps to listen to their community and work to ensure safe, welcoming and caring learning environments for all of their students and staff.”

Students staged the walkout in an effort to make their voices heard and to show the school board that real change is necessary.

“It’s important to walk out today because that’s all we can do. We can’t do a lot in the world, you know, we’re youth who are 16, 17, 18 years old in high school,” 16-year-old student McArthur Hilton told CBC News. “We just have to fight for our rights every day, and to be honest, if things aren’t changing here, we’re going to do the same thing every day until something changes.”

With assistance from a local non-profit, students compiled a list of demands for the school district. They want an anti-racism task force—which includes both students and parents—as well as anti-racism training for students and staff. They are also asking for the district to acknowledge its past failures and to take a more inclusive approach to the shaping of its curriculum and staff hiring.

Involved students are also pushing for any staff who use racist language to be fired.

The walkout that began at McNally ended at the nearby city police headquarters. There, students discussed their demands and the issues they’ve witnessed in and around the school with the hate crime co-ordinator for the Calgary Police Service, Const. Craig Collins.

The district said it is aware of the walkouts and the demands made by students.

“We hear the voices of our students concerning this important matter,” Szumlas said. “There is work to be done in our district on systemic racism. In consultation with stakeholders, we will work on professional development for all our staff and on information for our families. Each and every one of us has a role to play in the fight against racism.”

The Calgary Board of Education told CBC News that while it was aware of the planned walkout, the district did not endorse it. Students were not stopped from leaving class to participate in the protest, but all students who did so received unexcused absences.