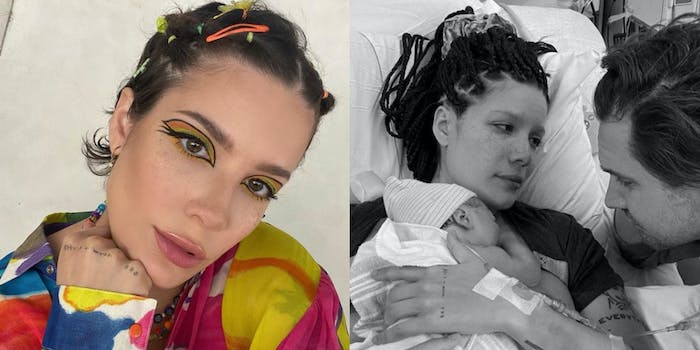 'Most of the people who see Halsey have no idea she is part-Black until she decides to wear braids.'

Halsey’s Instagram post on Monday sharing the birth of their child while wearing braids has erupted a debate on whether it is appropriate for them to wear braids as a “white-passing” woman.

“I was finna congratulate halsey on her baby’s birth but wtf is that in her head,” one user commented.

Braids are more than just a hairstyle; they are a large part of Black culture and ancestral history. Braids date back thousands of years to North Africa and reportedly once identified a person’s clan, marital status, or age. Halsey wearing box braids sparked a debate on the privileges of being a “white-passing” biracial woman.

Halsey spoke out in June of 2020 about being white-passing and their support for the Black Lives Matter movement.

“It’s not my place to say ‘we,’” she tweeted at the time. “It’s my place to help. I am in pain for my family, but nobody is gonna kill me based on my skin color. I’ve always been proud of who I am but it’d be an absolute disservice to say ‘we’ when I’m not susceptible to the same violence.”

Some people online said her box braids were tone-deaf and disrespectful to Black women who have faced a history of discrimination and even violence for their hair.

“In this world, and in the West specifically, she operates as a white woman, which means she’s afforded the same luxury and privileges as other white women,” TikToker @tales.of.apollo says in her viral video on the matter. “Most of the world, most of her fans, most of the people who see Halsey have no idea she is part-Black until she decides to wear braids and announce to the world, ‘Hey, I can wear braids because my daddy’s part Black.’”

Natural Black hair, such as afros, braids, or twists, has been seen as unprofessional at school or in the workplace. Research suggests that bias against natural hair limits job opportunities for Black women.

“At the end of the day, Halsey can take off those braids and operate in the world as a white woman, and Black women do not have that same kind of luxury and privilege,” @tales.of.apollo says. “Halsey does not have the same fucking experiences. She doesn’t.”

Some viewers said Halsey should be allowed to celebrate their heritage by wearing braids, while others said there was a more respectful way to honor their ancestry.

“She’s white with Black family,” one user commented. “She’s allowed to be proud of her heritage but she’s not Black.”