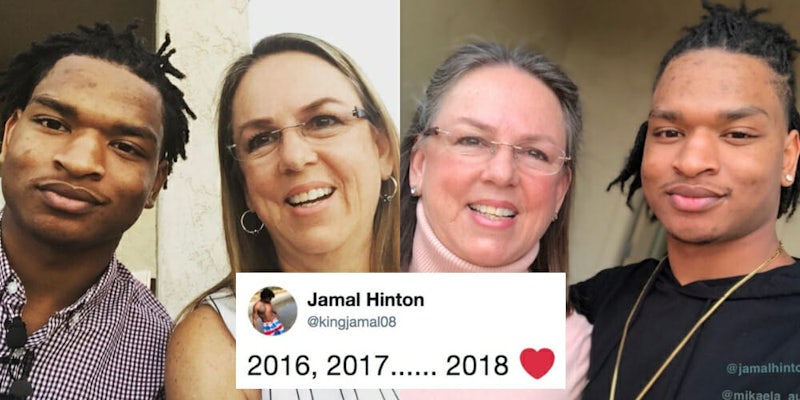 Grandma and random teen she texted celebrate third Thanksgiving together

They're the internet gift that keeps on giving.

Two years ago, they met because of an invitation texted to the wrong number. This year, they celebrated their third Thanksgiving as “grandma” and “grandson,” creating an internet legacy for the ages.

In 2016, 61-year-old Wanda Dench of Phoenix, Arizona, set this historic Thanksgiving tradition in motion when she accidentally texted then-17-year-old Jamal Hinton in a three-person group iMessage, thinking she had texted her grandchildren.

Somebody grandma is coming in clutch this year!! Ayee!!! pic.twitter.com/QGrx83nHLl

However, despite the mixup, and some people going a step further to text the grandma themselves asking for an invitation, Dench assured Hinton that he was welcome for a plate, and the two met for Thanksgiving that year, where she had turkey, mashed potatoes, pumpkin pie, and more.

And the good times didn’t stop there. Last year, Hinton joined Dench’s family once more, reminiscing about their origin story and taking the coincidence as a sign that people can be kind to one another without knowing their background.

So, of course, the internet went wild when it found out that three Thanksgiving dinners later, Hinton and Dench were still celebrating together.

“Gaining a new grandma—I thought, maybe I’d gain one getting married, but as a friend, it’s great,” Hinton told CBS affiliate AZ Family. “Maybe I can invite you if we get our own place?”

This is the type of positivity I’m tryna see on the TL pic.twitter.com/RXsFgrccBn

Man if y’all know the story. This beautiful

this is literally one of the most beautiful holiday stories

Dench told AZ Family that she’s completely down for a fourth Thanksgiving with Hinton and his girlfriend Mikaela Grubbs, but she’s ready to pass the cooking baton down to the grandchildren themselves. Outside of Thanksgiving, the pair still keep in touch throughout the year, going to dinner every couple of months.

In 2016, Grandma Wanda thought she texted her grandson about Thanksgiving dinner until she got a text "who is this?" Turns out she had the wrong number, asking a teen named Jamal instead. They celebrated that year together..and in 2017.

Today was their 3rd Thanksgiving together. pic.twitter.com/kBxI7zkJhx

“I’d like to retire from doing dinner and pass it over to the younger generation, and I’ll come and visit,” Dench said.