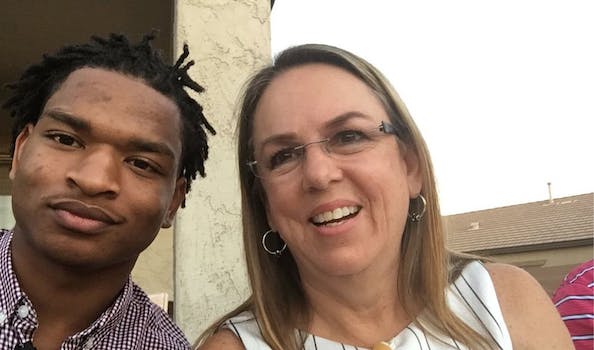 Grandma delivers on Thanksgiving dinner for the teen she randomly texted

A couple of weeks ago, everyone enjoyed the feel-good story of a grandmother who accidentally texted a Thanksgiving invitation to a random teen, then told him he was welcome to come despite the mixup. Well, grandma came through! The two met in person Thursday, according to Arizona news station ABC 15.

Wanda Dench meant to text her real grandson, but instead she got Jamal Hinton, who became her “honorary grandson” after they exchanged selfies. He may have just been joking when he asked “can I get a plate?” but the invitation was sincere, and he took her up on it.

“I’d never seen her before and she welcomed me into her home,” 17-year-old Hinton told ABC 15.  “That shows me how great of a person she is, I’m thankful for people like that.”

And did he get a plate? Hell yeah. Turkey, mashed potatoes, pumpkin pie, cheesecake .. grandma’s got the full spread.
“Grandma’s the GOAT,” Jamal said. The greatest of all time.

Dench didn’t think what she did was anything out of the ordinary, though. As she said in her text message, “that’s what grandmas do, feed everyone.”