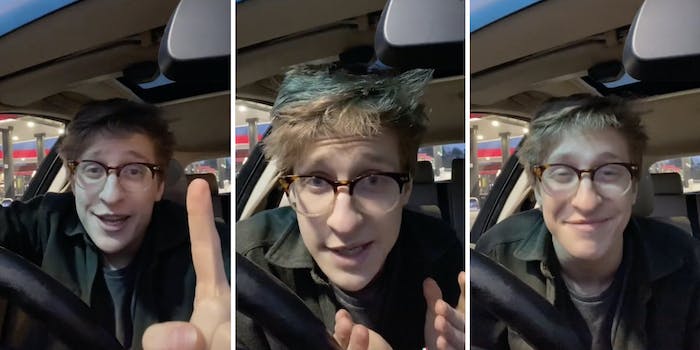 'Sir, I don’t make them laws, I just enforce them.'

A gas station employee on TikTok shares that he always gets a kick out of carding police officers whenever they come in for cigarettes or chewing tobacco.

In the video, TikToker Andrew Bilinsky (@newandrewvill) tells of the elation he gets from asking cops for their ID.

“I want to tell you guys about something that makes me happier than I can describe,” Bilinsky begins in the video. He then says that whenever police officers come in for cigarettes or chewing tobacco, Bilinksy makes sure to card them. “And I always do it in a stern voice,” he continues.

“I’m going to need to see some ID,” Bilinsky mimics in a deep voice, his expression serious.

“Oh, it makes me feel so good for like two seconds. I almost understand the power trip they get every single time they do that to somebody,” Bilinsky says. According to the TikToker, the funniest part is that each time the officers are asked for their ID, they are reluctant to oblige.

“They’re like, ‘seriously, I have to show my ID?’ And I’m like, ‘Yeah,’ and I smile really big,” Bilinsky continues in the video. “And then I shoo them on their way, goodbye, back into the night. Go waste our tax money some more.”

Bilinsky posted his TikTok on April 17, and it amassed more than 440,000 views. Many viewers had suggestions for Bilinsky.

“No one’s above the law, am I right, officer?” another user wrote.

“Be over the top with it next time. Check it under the light, tilt the card, hold it up next to their face. Anything to waste their time,” another viewer suggested, to which Bilinsky replied, “excellent idea.”

Update 7:16am CT, April 29: When reached for comment, Bilinsky told the Daily Dot that he always cards cops because he believes they are “part of a bastardized, for-profit system that aims to marginalize, oppress, and silence our people – mainly those of color.”

“Also I just think it’s really funny. I like to mess with ‘authority’. I know I’m not making an impact or truly doing anything meaningful when it comes to the cause, but if I can chip away at the disgustingly large ego of the police force in some small way, I think that’s kinda cool,” he added.

He said that an officer has “never outright refused” to show their ID.

“But they’ve all had something to say, some ‘really?’ or ‘seriously?’ and I even had one guy straight up point to his badge as if it was an ID when I asked for it, and I was like ‘no, I mean your photo ID. Do you have one?'” he said.