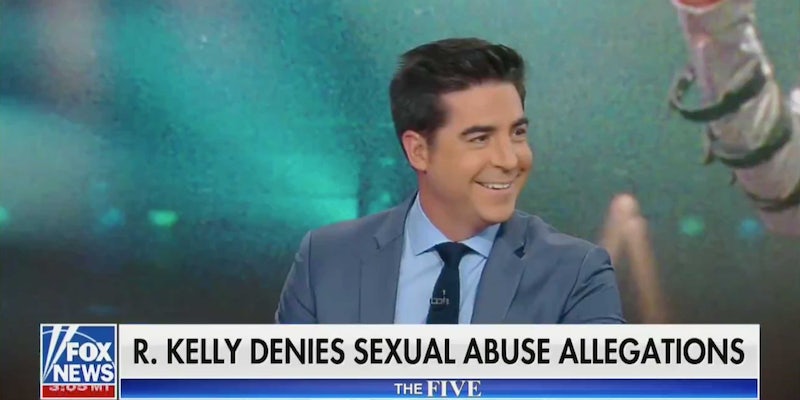 Fox News host confuses Gayle King and Robin Roberts, then laughs it off

Fox News Jesse Watters host mixed up Black morning show anchors Robin Roberts and Gayle King during The Five on Wednesday, following up the mistake with a smug smile while others laughed along.

The cringe-worthy moment was shared in a tweet by journalist Justin Baragona:

Fox News' Dana Perino has to correct Jesse Watters after he says "hats off to Gayle King for totally redeeming herself after the Jussie Smollett fiasco." pic.twitter.com/xbZot8H0Yo

Watters was bashing R. Kelly for his alleged sexual abuse of minors and then moved on to discuss Kelly’s recent interview with CBS This Morning‘s Gayle King, during which Kelly threw a tantrum and victimized himself. King has since been applauded (and made into a meme) for her calm as Kelly dramatically denied the charges against him. However, Watters felt the need to defend Kelly’s volatile behavior in the interview.

“When he had this emotional outburst, I do question whether or not it was planned, but at the same time I see a man who was cornered,” Watters says in the clip shared by Baragona.

“And he was acting like a child,” he continues. “I agree, hats off to Gayle King for totally redeeming herself after the Smollett fiasco.”

The “Smollett fiasco” was a reference to the recent interview of actor Jussie Smollett by Good Morning America‘s Roberts. Smollett, who in January claimed that he came under a racist attack by two men screaming “MAGA country,” has since been charged for staging the attack. The far-right loves to cite Smollett as proof that liberals are hysterical about racism and bigotry.

A panelist immediately corrected Watters, saying that it was not King but Roberts who did the interview. After he was corrected, Watters said, with even more cringe-worthy confidence, “Oh, I knew that.” He then laughed, and others joined in.

To make clear he was truly sorry, not just looking for another laugh about Black people, Watters reportedly apologized on a whiteboard after the mishap, still wearing that smirk on his face.