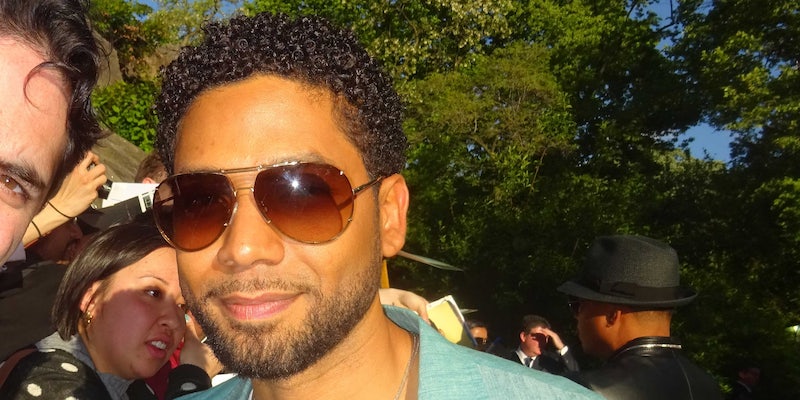 Call racism, homophobia, and hate crimes what they are.

The internet—and most of America—is reeling from the attack on Empire star Jussie Smollett. The details of the assault that took place in Chicago early Tuesday morning have since emerged and are harrowing: Smollett said two white men in ski masks poured what smelled like bleach on him and tied a noose around his neck screaming, “This is MAGA country.”

According to TMZ, his attackers also screamed, “Aren’t you that f—-t ‘Empire’ n—–r?” after he was leaving a local subway in Chicago. Some worry this attack may have been premeditated—as ABC News reported that Smollett received a hate note in the mail a week prior to the attack.

Tuesday’s attack sent ripples across many communities who identify with Smollett—a Black, queer person. It’s an intersection that often doesn’t get much space when we talk about discrimination.

I don’t really have a lot of words. Jussie is an amazing man. This is horrible. Homophobia is dangerous. Fuck MAGA. #WeLoveJussie https://t.co/CAyTO955tM

It doesn’t matter how rich or famous someone is. Jussie Smollett is still a Black gay man in a country with a deep history of white supremacy and homophobia. This is not an isolated incident – it happens every day. #SayTheirNames pic.twitter.com/gkapVUEGN5

Check on your LGBTQ folks today.

Many of us already walk with the burden of knowing an attack can happen at any time. Today just makes it that much more real.

Many pointed out that identifying the attack on only one or his other identity ignores the intersectional identities that were attacked.

They called him a faggot cause he is gay. They put a rope around his neck because he is black. This is why we need to address intersectionality in hate crimes.

One thing not being touched upon as much as it should be (at least not by the media) about the attempted lynching of Jussie Smollett is the intersectionality at play. The men who attacked him yelled out racist and homophobic slurs before their noose-and-bleach attack on him.

The fact that some of y'all, including LGBT+ identifying folk, are trying to say that the unfortunate attack on Jussie Smollett is more of a gay attack than a racist attack and vice versa, contribute to the erasure of the intersectionality of Queer Black people.

Smollet is also Jewish, and the Jewish community on Twitter has rallied in support for him since the attack.

This sickening, vile reported attack on @EmpireFOX star @JussieSmollett is a disturbing reminder of the terrible homophobia & racism that plagues society. We stand with you, Jussie and will never stop fighting against this kind of hateful violence. https://t.co/kMROwpmKao

Horrifying, heartbreaking, and deeply disturbing. Combat this hate by donating to a Black/LGBTQ organization today. https://t.co/V0fKEzBuhH

Proof that we still don’t know how to talk about racism and homophobia in America: The media—and Chicago Police Department—terming the attack as a “racially-charged” “possible” hate crime.

And the media continued to disappoint on that front.

Jussie Smollett, one of the stars of the television show “Empire,” was attacked in Chicago by 2 assailants who yelled racial and homophobic slurs. The incident is being investigated as “a possible hate crime,” according to the police. https://t.co/lsKiPiKYBa

BREAKING: Jussie Smollett has been hospitalized in Chicago after a possible homophobic and racially charged attack. https://t.co/GEwU6WfeeC

For an attack in which the perpetrators used expletives specifically against the Black community (the n-word) and the gay community (the f-word), not to mention a noose and possibly bleach, people were justifiably infuriated that the attack wasn’t described for what it was—racist and homophobic.

I'm a historian who's written about white supremacists, so let me assure you that when a violent attack on an African American man involves use of the N-word and the literal placement of a noose around his neck, you can go ahead and call that "racist."

Dear Media,
I can't take you describing what happened to Jussie Smollett as a "possible" hate crime. There's no "possible," it's the DEFINITION of a hate crime. Every time, we don't call a hate crime a hate crime it perpetuate this hate & this horrific violence.
Thanks,
America

this is the language of whiteness, of keeping power where it is, of bureaucracy, of the charade of second guessing what announces itself violently in public for hundreds of years

"Let it matter what we call a thing." —Solmaz Sharifhttps://t.co/5EyJ4nXVhp

“Possible hate crime”?! What more do you need? Racial and homophobic slurs, a noose?? @JussieSmollett I am so sorry this happened to you.

It isn’t a possible hate crime. Why are tragic crimes less of a sure thing when the victims are minorities and the perpetrator is not? https://t.co/kJe4DMFPpw

Stop it.
No more "possible"
No more "alleged"
Call it what it is….A HATE CRIME.
A hate crime carried out by a hate group called MAGA.

This is language of negation and abdication.

Anthony Guglielmi, the Chicago PD chief communications officer who tweeted about the department investigating the “possible” hate crime, told the Daily Dot in an email that the crime “is being investigated as a hate crime based on the narrative provided by the victim and the racial and homophobic language used during the assault. We continue to investigate the allegations and look for any evidence that could help us lead to the identity of an offender.”

In Illinois, a person committing “assault, battery, aggravated assault,” among other forms of abuse and/or harassment against another person due to their “actual or perceived race, color, creed, religion, ancestry, gender, sexual orientation, physical or mental disability, or national origin” classifies as hate crime and is a criminal offense.