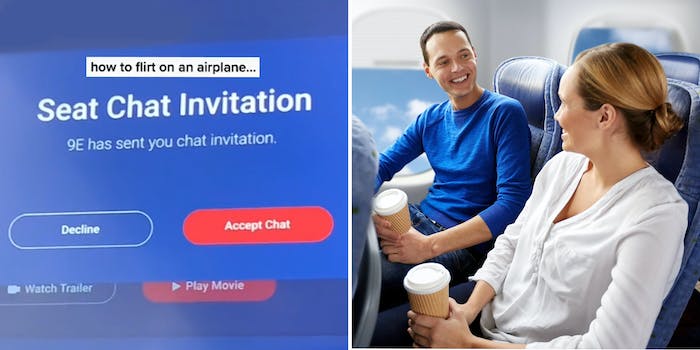 ‘It was so awkward’: Man tries flirts with passenger on Aeromexico flight through plane’s seat screen

'People will make anything a dating app these days.'

A woman on a plane said in a viral TikTok video that a fellow passenger attempted to flirt with her via the seatback screen’s messaging feature.

In the viral video, TikToker Steph (@ufosteph) shows her Aeromexico flight screen that displays an incoming chat invitation from seat 9E. She has the option to “accept chat” or decline.” The overlay text on her video reads: “How to flirt on an airplane…”

Steph said in the text overlay and her caption that she “turned off the screen to avoid interacting” and that the experience “was so awkward.”

Since 1994, Aeromexico has been cultivating a partnership with Delta Air Lines that has since provided a “free messaging service onboard,” as well as many other perks, according to the Aeromexico website. However, it is unclear if Steph is on a partnered flight.

Steph’s video has been viewed over 250,000 times. In the comments section, users are questioning the messaging feature and expressing what they would do if they were in her position.

“Is this a thing now? At least airdropping had an element of anonymity to it,” user @amaypolemob commented.

“People will make anything a dating app these days,” another said.

“My anxiety already operates at high capacity, this would send it through the roof! Confined space and it’s not like you can really hide. Ahhhhh,” a third wrote.

“I wouldve accepted out of boredom,” another said.

The Daily Dot reached out to Steph via TikTok comment as well as to Delta and Aeromexico via email.