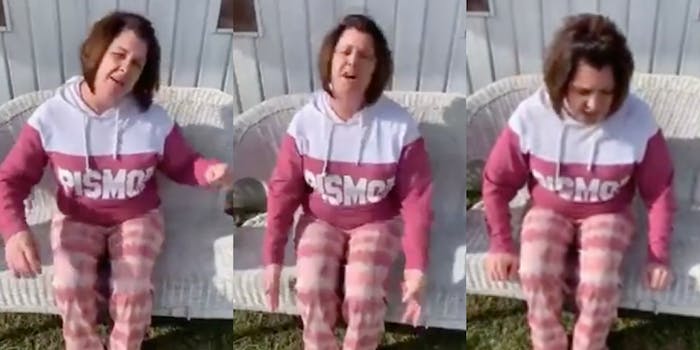 An expert said Shawn Skelton is 'clearly faking a problem.'

After claiming she received the COVID-19 Moderna vaccine, an Indiana woman posted a video on Facebook showing her body convulsing as she urged viewers not to get the vaccine. Users on Reddit accused her of faking a disability to spread anti-vaccine rhetoric.

Shawn Skelton, who works as a nursing assistant in a retirement and assisted living facility, posted the live video before it was spread to Reddit and labeled with the “Karen” tag.

“I am very real and unfortunately this is also very real,” Skelton says in the introduction to the video as her upper body moves sporadically.

Stephen Doig, a data journalism professor at Arizona State University and board member of the National Center on Disability and Journalism, told the Daily Dot that Skelton “is clearly faking a problem.”

Skelton’s Facebook page includes other videos with her alleged reaction to the vaccine. One video gained 66,000 comments and 243,000 shares in one week. “I know a lot of you are going to try to be jealous that I have better dance moves than you when I stand, but that is just me trying to be positive,” Skelton says in the video.

The comments on the video ranged from users sharing their personal struggles with disabilities to mocking comments calling her uncontrollable shaking the “Moderna Macarena.”

“Warning, the Covid-19 vaccine side effects may include middle aged women named Karen dancing for her new Facebook post,” one user wrote.

“There is nothing that would convince me that this is not from the Moderna vaccine,” Skelton says in the video.

Skelton also addresses her health before receiving the vaccine. She says on Jan. 4, she received the Moderna vaccine and felt fine. She describes later feeling flu-like symptoms and says by Jan. 6, she was feeling worse and couldn’t go to work.

“My tongue began to spasm out of control. By Thursday morning I was in full body convulsions. When I get upset they get a lot worse, but for the most part, this is my typical day,” Skelton says with her arms flailing.

The Food and Drug Administration advises that the Modern vaccine’s side effects include “tiredness, headache, muscle pain, chills, joint pain, swollen lymph nodes in the same arm as the injection, nausea and vomiting, and fever.” The FDA also says side effects are more common after the second dose of the vaccine and “typically lasted several days.”

Doig called Skelton’s video “an example of the desperation of the anti-vaccine people.”

“It is widely known that a lot of the anti-vax sentiment about autism, for instance, was based on largely fictitious science study that has been completely debunked, but the people that are pushing it continue to push that conspiracy,” Doig told the Daily Dot. “Now that the COVID-19 vaccine is out, the anti-vax crowd has shifted its attention there.”

As a data journalist, Doig debunks fake ideas and conspiracy theories. He said videos like Skelton’s fall into this realm.

“I would call it ridiculous, but it is really sad because some people who would be helped by the vaccine will wind up not getting it because they fall for this kind of behavior,” Doig said.