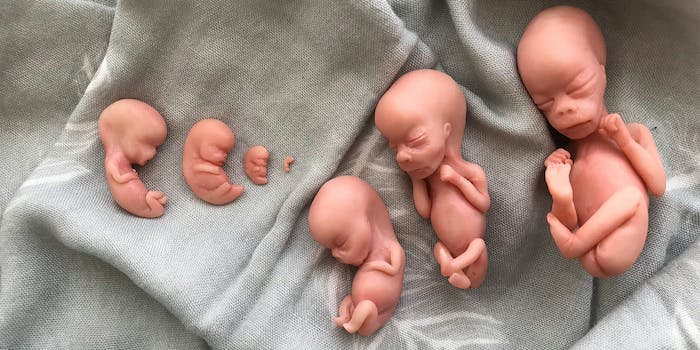 A ridiculous video is being shared by anti-abortion activists—is it real?

'Nothing about the video says to me this was immediately after an abortion.'

Anti-abortion advocates are sharing a video of unclear origins on Twitter that shows people in lab coats toying with what people claim to be aborted fetuses. But a look at the pixelated, low-quality video shows the small figures are most likely dolls that are used in medical practices. Still, that hasn’t stopped people—mostly men—from using the video to try and spread panic.

The six-second clip shows two people wearing white lab coats and gloves in what appears to be a medical or educational facility. There is no visible blood or bodily fluid as they bounce what look like rubber dolls or figures on a metal tray.

It’s not the first time the video has floated online. It appeared in a July 2018 article on anti-abortion news website LifeNew.com, which has reported false information in the past. The LifeNews article claims the video was found on a Venezuelan Facebook account called “Vídeos Mundo Curioso,” which no longer exists. Cheryl Sullenger, who authored the LifeNews article and is the senior vice president for anti-abortion organization Operation Rescue, did not respond to the Daily Dot’s request for comment.

Pavone also did not respond to the Daily Dot’s request for comment. Twitter user @_thomicastillo, who lives in Argentina and was among the first to recirculate the video this week, told the Daily Dot in Spanish that he didn’t know where the video originated but that he thought it was real.

After being circulated this week via multiple accounts, the video is causing mass outrage. It’s been shared by Republican conspiracy theorists like Jack Posobiec, who has been retweeted by President Donald Trump, and pundit Matt Walsh, who compared abortion providers to ISIS.

Dr. Jennifer Gunter is an OB-GYN who is active on Twitter and often busts myths about abortion and other medical misconceptions. She told the Daily Dot that she had only seen the clip on her phone and that it’s difficult to say for sure what the people in the video are handling. Still, she said it’s unlikely the video shows medical professionals handling a fetus after an abortion.

“I can’t tell if they are old specimens, dolls, bodies on the morgue,” Gunter said. “I don’t think people would be dressed like that and handling dolls. We also don’t know if they are fetuses, premature neonates who died, or if they are nonhuman primates! However, nothing about the video says to me this was immediately after an abortion.”

When someone on Twitter tried to suggest they were neonatal dolls, Walsh, whose bio doesn’t reflect any experience in the medical field, argued with them, claiming this is the result of a “dilation and extraction” method. It wasn’t clear how he arrived at that conclusion. He called it “partial-birth abortion” too, which is not a medical term, it’s a political one, according to NPR. The term was developed specifically to raise public opposition against abortion.

There are people arguing the invalidity of the video, but they are in the minority in large part because of where the video is being tweeted from: anti-abortion circles.

It’s the use of fake videos to rile up the gullible that I find infuriating. This, and the fact they strongly imply that doctors who perform abortions are taking this as a joke.

Why would you perpetuate this. It’s clearly fake. This is a perfect example for why I left the NRA. Good God man. Hope you got the clicks you were looking for.

Many people on Twitter insisted the “fetuses” involved in the video look unrealistic and that the context of the video doesn’t imply that it shows a post-operation setting.

Massive prize for whoever managed to dry out these clearly real fetuses so they don’t even make gloves or trays wet. We def need more women’s representation in the fake abortion video production sector

I am still leaning towards thinking they are toys, but only because they look way too clean

Twitter has an extensive set of rules against videos that are violent and “gory,” plus rules against spamming, but the policy strictly on fake information is not clear, aside from a 2017 blog post that states the site is working to improve this. This is not the first time such content has been allowed to remain on such platforms; recently, Facebook refused to remove a doctored video showing House Speaker Nancy Pelosi (D-Calif.).

A Twitter representative said they’re looking into the abortion doll video, and the Daily Dot will update the report when they respond.