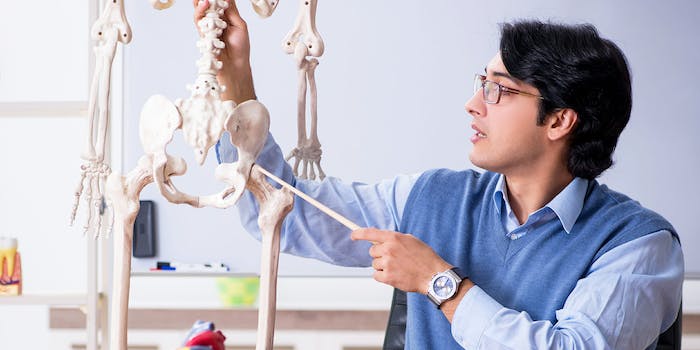 This dude who mansplained ‘vulva’ to a gynecologist gets blasted online

He called her expertise ‘part of the problem.’

Mansplaining is always painful to watch, but one man took it to a new level by telling a gynecologist on Twitter that she’s wrong about the word vulva.

The exchange started in response to a Guardian article titled “Me and my vulva: 100 women reveal all” about Laura Dodsworth’s latest photography project, Womanhood, in which she photographed 100 vulvas belonging to women and gender-non-conforming people.

Apparently thinking that the woman who wrote the article and the woman who has done multiple art projects about genitals must have less knowledge than him on the subject, a random man named Paul Bullen responded, saying, “The correct word is vagina.”

Gynecologist and women’s health advocate Jennifer Gunter made the noble decision to put in the work to try to educate this mansplainer. She introduced her credentials; let Bullen know that vulva was, in fact, correct; and linked to a post she wrote about the difference between the vulva and the vagina, with a handy Venn diagram that shows where there is overlap.

“I’m sick of people forgetting the poor vulva and referring to everything in the female lower reproductive tract as vagina,” wrote Gunter in the 2015 post. She explained in the short post that this inaccurate language being so pervasive is symptomatic of a culture that doesn’t value women’s sexuality. “No one confuses male anatomy, when people say penis they don’t really mean the testicles,” wrote Gunter. “Vagina as a catch all means it doesn’t matter enough to get it right.”

Bullen, rather than listen to the person whose job it is to understand these parts, turned his mansplaining knob up to 11.

— i bless the rains down in castamere (@Chinchillazllla) February 10, 2019

In several tweets, Bullen essentially argued that Gunter’s expertise is “part of the problem” and that it’s natural that she (an expert) would “prefer the technical terms.” But because people often call it a vagina, that use is legitimate. As so often happens, rather than admit he was wrong, Bullen pretended his original claim was different.

I am saying that as is the case with many English words, the one under consideration has both a narrow and a general meaning, in as much as meaning can be associated with usage. I am not denying the narrow meeting. I am acknowledging the broader usage.

Gunter was not having any of it.

I thought we would circle back to your original tweet because the claims you are now making are refuted by it. You said “correct” not “modern vernacular” or “slang” or “common use.” The correct term is, indeed, vulva.
But do go on… https://t.co/DMkqi7Sk0Y

For his part, Bullen is still refusing to acknowledge that he was wrong, claiming that people “misconstrued” his “provocative statement.” He even mansplained mansplaining, so self-awareness may be a long way off.

That’s an incorrect use of the word mansplaining. :-). Not that I want to legitimize the term, but by its own definition it requires more than just having just a man who is explaining something. Even if some in the audience are women.