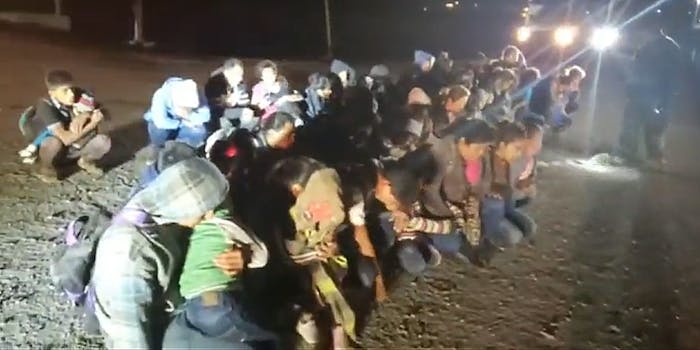 Facebook is still letting border militias organize on its platform

'Patriots' are harassing incoming migrants, and Facebook is allowing these videos to circulate.

The videos are all similar: shaky, blurry. The person behind the camera phone makes commentary as if they’re an immigration official, confronting and questioning tired, terrified migrants crossing the border.

But these video-makers are not officials. They’re not Border Patrol, nor are they employed by the United States government. They call themselves patriots, and they’re physically enforcing their anti-immigration agenda on incoming asylum seekers.

While these interrogations have been going on for months, none of it made headlines until a border militia group called United Constitutional Patriots (UCP) was suspended by PayPal and GoFundMe for raising funds in late April. But just because its crowdfunding strategies have been stifled doesn’t mean it’s not still thriving online. UCP continues to find an audience and organize through a platform that doesn’t seem interested in blocking it: Facebook.

Granted, since its payment accounts were suspended, UCP has taken steps to “secure” itself. On Facebook, the group used to be open but has since become closed. And yet the group, which had 3,000 members in April, now has more than 5,800.

The UCP members aren’t the only ones harassing migrants and propagating abuse on Facebook, either. Another group, called the AZ Patriots, also shared videos of people chasing down migrants or confronting them with questions. In a video titled “The Invasion of America,” posted earlier this month, a woman out-of-frame screams, “Go home!” and “Fuera!” or “Out!” in Spanish.

“They’re hiding,” laughs the woman, as the group of migrants is seen in the distance trying to hide behind a sea of pine trees. “They don’t know what to do.”

In another instance in the video, the woman is heard laughing as they corner the immigrants to an area where Border Patrol is stationed. “See, I’m helping you,” she laughs, supposedly talking to border agents. “I just found them over there, in the bush, I brought them out here to the street for you, sir.”

In a photo shared on AZ Patriots’ page last month, members from the group smiled gleefully with incoming migrants in the background. “We yelled at them in broken Spanish and they turned around,” the caption read.

Individual users are also posting videos on their personal Facebook pages and live streaming themselves intimidating, harassing, and haranguing asylum seekers. For example, a woman named Debbie Collins Farnsworth has posted numerous live videos confronting incoming migrants. (Currently, when you click on the videos, a notification says they aren’t available right now, signaling they may have been set to private or have been removed.) Her videos have garnered thousands of views and hundreds of shares and receive much fanfare, offering a glimpse at how well this kind of anti-immigrant sentiment and intimidation is received on Facebook, where this rhetoric can spread.

“There are no words for what’s going on other than please dear lords help us because this is an invasion and it’s never ever ending,” says a woman behind one of the live videos on Farnsworth’s page, shared about a month ago.

“They’re like cock roaches, they’ll never stop, until you place guard towers strategically along our border with live rounds!!!” another commented.

“We are going to have an epidemic,” wrote another about the migrants coughing in Farnsworth’s video. “Buy masks, you will need them.”

The irony in all this panic of an “invasion” is that what’s most clear in these videos is how exhausted and frightened the migrants look. They are the ones facing yet another threat, and it’s a threat that shouldn’t have any power.

Facebook’s hate-speech policy says it doesn’t allow content that “dehumanizes” people based on their identities, including race and national origin. “We define attack as violent or dehumanizing speech, statements of inferiority, or calls for exclusion or segregation,” its policy reads.

And yet here are videos of people harassing and falsely detaining migrants being shared for the purpose of rousing contempt for immigrants and inciting panic among followers. Then, commenters clearly call people “cockroaches” based on their migrant status. It’s unclear how none of what these groups post is considered a violation of Facebook’s hate-speech policy.

A Facebook spokesperson told the Daily Dot that content publicizing crime, glorifying violence, or using hate speech against people based on characteristics like national origin is not allowed. The spokesperson also said that if Facebook finds UCP or its members in violation of Facebook policies, the content and users’ accounts would be removed. Facebook did not respond to specific questions about AZ Patriots or user Debbie Collins Farnsworth. However, the spokesperson said, it is not against Facebook policy to argue in favor of restricting immigration policy.

Legally, though, Facebook doesn’t have a responsibility to remove these type of posts, thanks to Section 230 of Communications Decency Act, which says social media companies aren’t held responsible for content that’s shared on its platform. However, with this non-responsibility comes a lot of freedom with what websites can choose to control or not, argued Slate in February. “In reality, Section 230 empowers tech companies to experiment with new ways of imposing and enforcing norms on new sites of discourse, such as deleting extremist posts or suspending front accounts generated by foreign powers seeking to interfere with our elections,” Joshua A. Geltzer wrote.

Jennifer Granick, a surveillance and cybersecurity counsel with the ACLU, explains that the purpose of the law “isn’t necessarily to protect the tech companies, but to protect the American people in having a platform where you can post information and post our stories, because if the platforms were liable for information that their users publish, then they wouldn’t be able to publish that information. They would have to go through some kind of advanced review process.”

Hate speech in itself is not illegal on social media, either, says Granick; it’s actually protected under the First Amendment, unless it’s a direct threat, which probably gives Facebook greater leeway to allow such content.

While Facebook’s recent purge of white supremacists from its platform has invoked a myriad of reactions, it’s a bold move for Facebook to continue allowing groups such as UCP and AZ Patriots on its platform, especially since UCP leader Larry Hopkins was arrested by the FBI last month for being a felon in possession of firearms and ammunition, and with PayPal and GoFundMe dropping UCP. Also, even if Facebook isn’t legally required to remove any content, that hasn’t stopped the social media giant from banning women for posting negative comments about men, or from removing a photo of nude art at the Louvre, or from policing Black voices in general. Many Black Facebook users’ accounts have been suspended or their content blocked for simply writing “white people” or sharing incidents of hate speech they’ve faced.

As far as the legality of the activities of these militia groups themselves, the ACLU has filed a Freedom of Information Act request, demanding Border Patrol release its communication with UCP to determine how closely they are working together. Border Patrol did not respond to the Daily Dot’s request for comment on whether it’s taking assistance from groups such as UCP or its members.

These Facebook groups, meanwhile, continue to be a cauldron of anti-immigration propaganda, a place where extremists can share their thoughts about hurting migrants, laugh at immigrants’ existence, and feel validated in their hate. However, immigration advocates say that having these groups out in the open might strangely be a safer scenario than the alternative.

“Driving these types of organizations into the fringes and underground actually is dangerous, where those ideas fester where people are encouraged to feel themselves martyred,” says Granick of ACLU. “You need to have that conversation, you need to have people be educated in order to be able to understand those conversations. And address the idea instead of ostracizing the person or the people.”