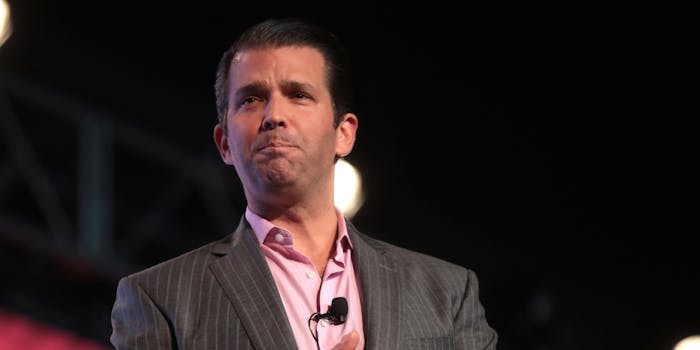 He suggested it won't be long before the 'purge' affects others with similar views.

Donald Trump Jr. now has a purpose in life: to “fight back” against the recent ban imposed by Facebook and Instagram on far-right extremists on their platforms.

“Ask yourself, how long before they come to purge you? We must fight back,” the president’s son said on Twitter on Friday, one day after the social media giants announced the ban.

The purposeful & calculated silencing of conservatives by @facebook & the rest of the Big Tech monopoly men should terrify everyone.

It appears they’re taking their censorship campaign to the next level.

Ask yourself, how long before they come to purge you? We must fight back.

The bans came following much scrutiny and pressure on the social media organizations to take responsibility for the hate and misinformation being spread on their platforms. Prominent figures with thousands of followers, such as Laura Loomer, Alex Jones,  Milo Yiannopoulos, and Nation of Islam leader Louis Farrakhan, were among those banned.

Facebook told CNN that they have “always banned” organizations and individuals that promote hateful rhetoric that incite violence, and their process of monitoring these accounts is “extensive.”

Some defended Facebook’s decision in their responses to Trump Jr.’s tweet:

I’m a Conservative. Those people defiled everything we stand for. They are conspiracy peddling loons, preying on the ignorant, disregarding facts, truth and law for attention and money. If you were actually a Conservative, you would applaud their ousting. They debase us all.

But others cheered him on, many urging him (or others) to start their own social media company.

Gab, the website that bills itself a “free speech software company” and hosted the Tree of Life synagogue shooter’s hateful rhetoric, was quick to jump in and remind the world—and Trump Jr.—that it’s still around:

Indeed, banning these personalities on social media will push them underground, but it won’t make those posting hateful content—or those with the sentiments who follow and share such content—completely go away. And with platforms like Gab jumping at the opportunity to host those being banned from mainstream platforms, the possibility of “fighting back” seems ominously likely.