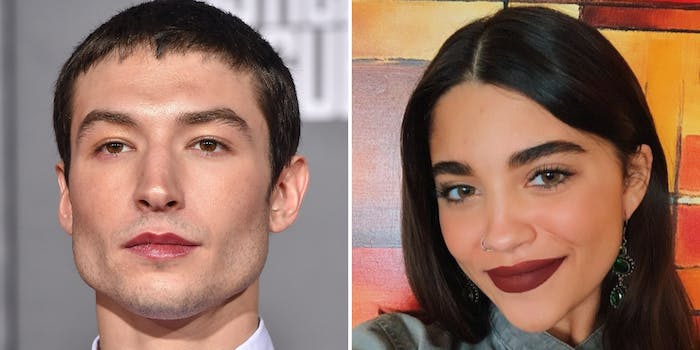 ‘You took everything from me’: Young person on TikTok accuses Ezra Miller of being an abuser

This is not the first allegation made against the actor.

Days after getting arrested in Hawaii for alleged assault—again—film actor Ezra Miller (they/them) is being accused of being an abuser by their alleged ex.

In a viral TikTok, creator Mia Solange (@miasolange), who uses they/them pronouns, posted a series of photos allegedly taken in 2019 of themselves and the Fantastic Beasts star. The photos, mostly of Solange and Miller spending time together, hinted at an intimate relationship. The video uses the trending sound from the animated film Coraline, in which a character says, “You are in terrible danger.”

In the caption, Solange added more context to the alleged relationship.

“You took everything from me. Ezra M***er is not a good human. And I can finally say so without being terrified. #abuser,” they wrote. The video currently sits above 3 million views.

While the viral TikTok was posted on April 23, it seems Mia’s story was first shared publicly on Twitter on April 1. Twitter user Ren (@lotsofgaycrimes), who also uses they/them pronouns, shared screenshots of Instagram messages between them and Solange. According to the screenshotted messages, Solange said Miller was “off his fucking rocker.” Solange also alleged in the messages that Miller once cursed out a person trying to help fix Solange’s flight and once misgendered them during sex.

“We were having sex one time and he knows I use they them pronouns and still stroked my hair and said ‘good girl.’ Mind you I am 19,” they wrote. In another message, Solange claimed that Miller hasn’t really threatened them, but when they were physical, Miller would bite “the shit out of [them.]”

Ren added photos of Solange and Miller in the Twitter thread, including a photo of Solange’s alleged bruised leg.

This isn’t the first time Ren has spoken publicly about the actor. In fact, their Instagram is dedicated to exposing the actor’s alleged harassment against them and others. Ren’s account (@vintage.devil) has been sharing screenshots and messages of alleged stalking behavior as far back as 2017, when they used to run a Miller fan blog on Tumblr, prince-Ezra-miller. When reached for comment, Ren told the Daily Dot that Miller has “ruined [their] life” and made their life a “living hell.”

According to Ren, the celebrity allegedly exhibited stalking behaviors by “copying” their outfits and sending anonymous asks on Tumblr after they met in 2017. Ren said they attended a Sons of an Illustrious Father concert, a band Miller is a part of that is now known as Oddkin, where they gave Miller drawings containing Ren’s deadname. This led Ren to believe Miller was able to connect the popular anonymous Tumblr blog to them. Shortly after, Ren claimed they began to receive “suspicious” asks on Tumblr and site visits from an IP address linking back to Warner Brothers Entertainment. Miller is the star of Warner Bros. The Flash, which was set to release in June 2023 but has since been delayed.

Ren’s Instagram account documented the “traps” they laid out to prove the actor has allegedly been following their every move. According to Ren, they decided to question Miller directly by emailing them in January 2018. After receiving no response for weeks, Ren uploaded their story on BuzzFeed as a contributor. Immediately the post was taken down. On Jan. 27, 2018, Ren said they received an email from Miller’s bandmate Lilah Larson sent back an email to Ren asking her to “stop giving us such a hard time.”

“I get that you’re hurting and things are hard, but we’re really not your enemy,” the email reads. “You’ll find that whoever was doing whatever you think we were doing was none of us.” The email address the message came from is confirmed to be associated with the band at that time.

Larson then allegedly implored Ren to seek help for their mental health and that “there’s no shame in that.”

“They work overtime to try and silence me,” Ren told the Daily Dot.

Later that June, Ren said they were served an ex parte allegedly on behalf of Miller. An ex parte is an emergency restraining order, and Ren’s case involved scans of one of their Instagram posts containing a real gun and captions inciting violence, according to screenshots on their Instagram.

However, the case was later dismissed in October when Ren moved from Indiana to NYC, as they claim Ezra was trying to meet up with them in Brooklyn. Ren said there has been no other contact from Miller or their bandmates since then. However, they said Miller continued to “copy” them well into 2020.

After that, Ren said they stopped posting on Instagram up until this year, when Miller made headlines with multiple arrests. “KARMA IS A BITCH AINT IT,” they captioned an Instagram post containing a TMZ video of Miller. Miller has been arrested twice in Hawaii for alleged disorderly conduct, harassment, and assault. The latest infraction reportedly involves a restraining order against the actor for allegedly threatening a couple.

While the 29-year-old star is being criticized for recent alleged violent behavior, several young women have stated the alleged behavior is nothing new. In 2020, the Justice League actor went viral after allegedly choke-slamming a fan on video. Others on Tumblr claimed they have been saying years ago that Miller was an abuser and is aggressive toward women.

“I called Miller out for shit years ago and no one believed me,” Tumblr user oscar-b-Wylin said on the platform. The creator did not immediately respond to a request for comment via Tumblr.

“I’ve met him some time ago at a bar and had a traumatic experience. Fangirls started stalking me and told me to kill myself when I exposed him,” Tumblr user sleep-divination blogged. Tumblr user Sleep-divination did not immediately respond to a request for comment via Tumblr.

Solange and Miller’s agent did not immediately respond to the Daily Dot’s request for comment via their contact form.