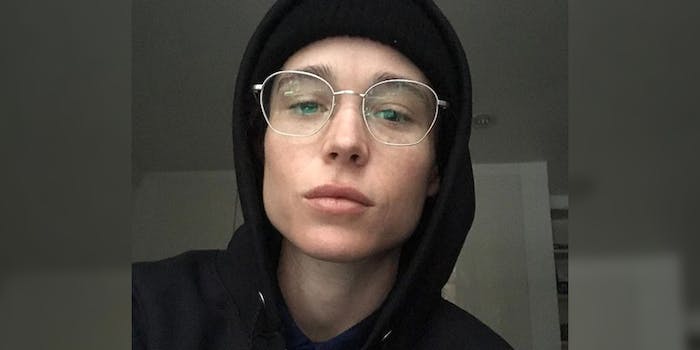 Elliot Page just gave a joyous interview with Time—so why are transphobes framing it as a tragedy?

TERFs are having a field day pushing harmful narratives.

Elliot Page just gave a heartfelt, joyous interview with Time magazine about his lifelong journey toward coming out and living as his authentic self and expressing support for trans children to receive the affirmation and care they need. Naturally, trans-exclusionary radical feminists (TERFs) are furious, tearing him down while raging about the “mutilation” of young girls caught up in the “trans cult.”

Page also received a lot of support, with people enthusiastically celebrating his newfound happiness and the opportunities for trans youth created by his coming out. However, despite the growing public support for trans people and their right to live authentically, the Time magazine Twitter thread quickly filled up with people angry about all of these things, attacking Time, trans-affirming medical care, and Page himself for “Inspiring more young people to doubt their biology and turn to surgery and hormones to fix their problems.”

The opposition to trans masc healthcare has had a particular emphasis on detransitioners lately. The counterpart to the transphobic claim that trans women are perverts attempting to enter women’s spaces, trans men are patronized with the insistence that they’re confused and traumatized girls trying to escape misogyny through becoming the enemy. Detransitioners are extremely useful for backing up this claim.

While some people who undergo transition do end up detransitioning it’s much rarer than the people using it to attack trans rights make out. Only 1% of people who transition end up making that choice, and the vast majority of them do so due to either safety concerns or familial, social, or financial pressure, often retransitioning again when their circumstances change. Though people who genuinely regret transitioning exist, and they need to be treated with respect as well as provided with appropriate healthcare, they are rare and in no way an argument for preventing other trans people from transitioning in case they regret it later.

Elliot moving forward and living his life, and the obvious happiness and success expressed via his interview undermine an attempt to paint trans men as confused victims of patriarchy and an evil trans-medical conspiracy. A recurring comment on the interview and suite of photographs taken to accompany it is that he looks miserable now in an attempt to apply to confused and miserable trans trope to him.

Page’s continued visibility and willingness to directly address the arguments meant to keep trans people down, especially trans children in the closet, make him a powerful force for countering these attacks on trans rights. Something as appreciated by the trans community and their allies as it is threatening to those who want to erase them.

““We know who we are,” Page says. “People cling to these firm ideas [about gender] because it makes people feel safe. But if we could just celebrate all the wonderful complexities of people, the world would be such a better place.””