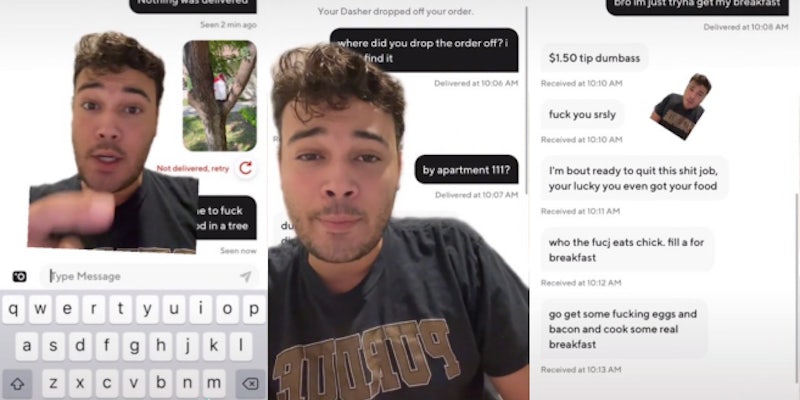 ‘I’m bout ready to quit this sh*t job. You lucky you even got your food’: DoorDash driver leaves Chick-fil-A order in tree, sparking debate

'The dasher was spitting fax at one point.'

In a viral TikTok video, a DoorDash customer shared an experience with a driver who allegedly left their Chick-fil-A order in a tree.

The creator, Aaron (@i.aaron), reveals screenshots of his messages with the driver. He received a notification that his order had been delivered, however, Aaron couldn’t find it.

“Where did you drop the order off? I can’t find it,” he messaged the driver.

“What does that mean?” Aaron questions in the video, asking the driver if his order was near his apartment.

“Dude go fuck yourself you fucking shit,” the driver allegedly responded, before going off on the customer to come outside to get his food—with even more profanity.

Aaron says he found the order placed in a tree on the other side of his apartment complex.

“He must be having a bad day,” he adds in the video, showing the next message he sent the driver. “Dude I’m just trynna get my breakfast,” Aaron wrote.

However, the DoorDash driver then went off on him for tipping only $1.50 when the order was placed.

“I’m bout ready to quit this shit job. you lucky you even got your food,” the driver allegedly responded. “Who the fuck eats Chick-fil-A for breakfast? Go get some fucking eggs and bacon and cook a real breakfast.”

At the end of the clip, Aaron admits that he did eat his Chick-fil-A order, though he notes he did get a refund.

“It was a gamble,” he concludes.

The video amassed over 265,000 views since it was posted Sept. 15, with many viewers in the comments section siding with the driver.

“The dasher was spitting fax at one point,” one user said.

“I was on your side but saying you only tipped that bc it was 13$ but not equating the service and gas to bring it,” a third stated.

Other viewers shared their unsatisfactory experiences with DoorDash and its delivery drivers.

“DD has repeatedly delivered my food to the wrong building! Last time the guy yelled at me, ‘what’s the problem, I put it by apt 3803?’” one person shared.

“I just ordered Dunkin and my dasher went to a completely different neighborhood and circles it for 15 mins and gave me my FROZEN coffees all melted,” a second recounted.

“Someone did this to me but with a random bush, then got mad cause I said it wasn’t delivered and she lost the money,” a third wrote.

Aaron posted a follow-up video, responding to a comment in the original video, which claimed the Dasher was the viewer’s “hero.” Aaron says he doesn’t understand why the viewer would idolize someone who did their job poorly.

“Yeah, this is a horrible take,” he says.

In addition, he noted that the DoorDasher driver had the option to accept or reject the order. Aaron then defended his reason for tipping less, stating that his order was small and the Chick-fil-A location was “.4 miles” from his apartment.

“Make it make sense,” he wrote in the caption. “Very pro tipping people who deserve it but tip culture is outta hand. it’s not my fault doordash doesn’t pay their employees.”

His response led several viewers to share their own opinions on tipping.

Some commenters argued that his low tip deserved the poor service.

“lol you don’t have to like the take, but don’t complain about the service. I tip $5 minimum and my food has never been in a tree,” one user said.

“It’s .4 miles from YOU. they had to drive back and forth,” another noted.

However, others claimed the Dasher’s behavior was unacceptable regardless.

“The way he acted he doesn’t deserve the tip anyway,” one viewer wrote.

“Not the dashers in the comments coming for u!! if the dasher didnt like the tip he shouldnt have accepted the order,” a second argued.

The Daily Dot reached out to Aaron via TikTok comment and DoorDash via press email.