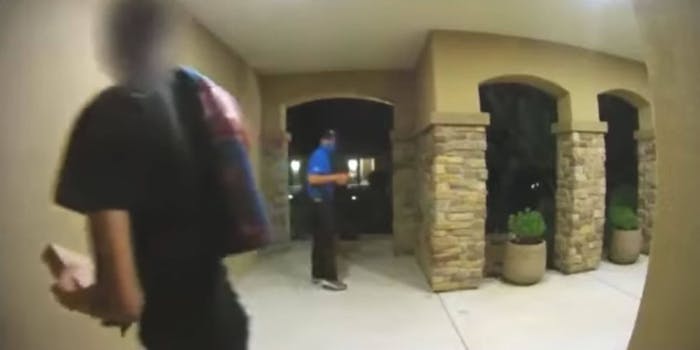 'I don't make f*cking money if I don't get tipped.'

Ring doorbell footage surfaced of a Domino’s Pizza delivery driver yelling at two teenagers for not leaving a tip. Now, TMZ has learned, the employee was fired.

At the start of the footage, the driver is seen waiting for the signed receipt of the order he just delivered. As one of the teens hands him the receipt, the driver looks at it and sarcastically says, “Thanks for the tip.” The teen shrugs him off and proceeds to go back into the house, prompting the delivery driver to call him a “douchebag” and say, “F*ck you bro.”

“It’s not even for me,” the teen says, as he chuckles in disbelief. “It’s for her,” he adds, pointing to his sister, who placed the order. “Well, tell her I don’t make f*cking money if I don’t get tipped,” the driver yelled. “I just brought you your [order] with my gas.”

The father of the two teens, who was out of town at the time, later filed a complaint. He received a phone call from both the owner and general manager of the Domino’s location in question, offering their apologies for the employee’s actions. “I am a small franchise that is locally owned and operated,” the owner told TMZ. “We always strive to do what is right.” A Domino’s representative also hand-delivered $500 worth in gift cards to the family.

The father spoke to TMZ and said the incident was a misunderstanding. His 13-year-old daughter ordered a Domino’s sandwich with his credit card. He goes on to explain that when the order arrived at the door, she gave the receipt to her older brother. They left the tip blank because they thought the delivery charge was the tip for the driver.

The father highlighted the importance of tipping delivery workers, especially during a global pandemic, according to TMZ.

The Daily Dot has reached out to Domino’s.