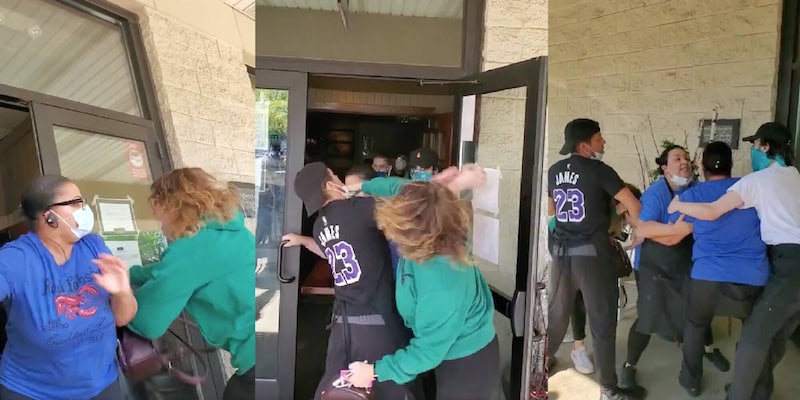 She can be seen slapping the staff and forcing her way inside.

A fight broke out at a Pennsylvania Red Lobster on Mother’s Day as one woman was fed-up with the three-hour wait time.

A video of the incident surfaced and went viral, leading “Red Lobster” to trend on Twitter. The woman at the center of the video has since been given the moniker of “Red Lobster Karen.”

At the beginning of the video, filmed by an onlooker, the woman is seen being forcefully shoved out of the restaurant by an employee as she screams, “Give me my motherf*cking money back.” Other employees begin to help out their colleague and continue to push her out.

They try to close the door on her, but she grips onto the door and demands a refund. “You will get it,” one employee yells out, as she continues to pry her way in. “Let me show my bill to get my refund,” she shouts. The employee explains that all that is needed is her name, so she yells back her name.

Another employee tries to close the door, causing the woman to retaliate with a slap directed at two employees standing in the doorway. One begins to fight back, but her co-workers jump in and hold her back.

As the fight breaks up, the customer claims that she was the one who was attacked. “I was assaulted, and I have a whole crowd to see it,” she says. Patrons who were witness to the altercation can be heard in the video saying, “You were the one who hit her first!”

The customer then collects her things and leaves. The police were called to the scene, but she was already gone by the time they arrived, according to the New York Post.

A lieutenant from the Springettsbury Township told the York Daily Record that “she was upset because her food wasn’t ready. She wanted her money refunded.”

No charges have been pressed yet, according to the newspaper. The Director of Communication for the seafood chain, Nicole Bott, told the York Daily Record that the manager who was struck by the customer was not injured.

The York Daily Record also obtained a statement from the restaurant chain’s spokeswoman who explained that the reason for long wait times on Mother’s Day was due to the coronavirus-driven “staffing and operational changes.”

“It is always our goal to provide our guests with a great seafood experience, and unfortunately, for some guests, we did not meet that goal on Sunday,” the statement read. “We are working to better understand what occurred and how we can prevent it occurring in the future. That said, we do not tolerate violence for any reason in our restaurants.”