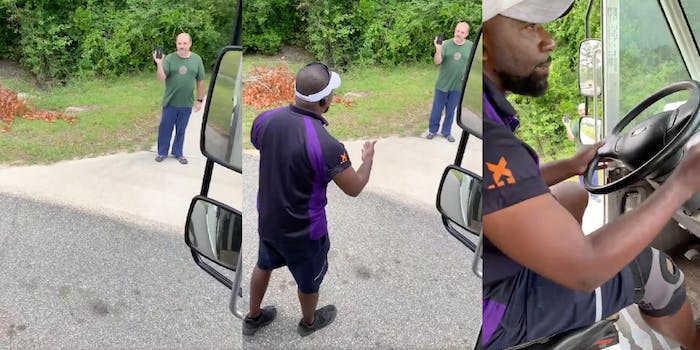 The video captured a customer accosting Black FedEx workers for trying to deliver a package to his house.

Update 1:42pm CT, May 21: When reached for comment, FedEx spokesperson Rae Lyn Rushing told the Daily Dot the company is investigating the incident. “FedEx takes extremely seriously any allegations of discrimination, retaliation, or improper employment actions. These individuals are employed by an independent service provider and FedEx will be conducting a thorough investigation into these claims. While we conduct this investigation, FedEx will provide employment for these drivers,” Rushing said in a statement.

A recently uploaded video captured a customer accosting Black delivery workers for trying to deliver a package to his house. Now, the workers say FedEx has fired them.

In the video, which has been viewed over 1 million times, a Black man in a FedEx uniform goes back and forth with a white customer, who he alleges threatened him.

“You didn’t have to come out here cussing me like that,” the worker says in the video.

Eventually, the worker gets into the delivery vehicle and drives away.

The video went viral within hours of being uploaded, with many decrying the customer’s behavior.

On Wednesday, a person claiming to be one of the workers reported he was fired for refusing to delete the viral post. He explained his side of the story on Twitter and revealed FedEx’s alleged decision to let him go.

“FedEx called and told me to take down this video and fired both of us Today .. I’m reposting this video because people like him doesn’t matter white or any race should never disrespect essential workers putting their lives in jeopardy especially with this covid-19,” user @Toniob38 tweeted.

In the Twitter thread that followed, he said the customer accused him and his co-worker of trying to break into his house and threatened to call the cops on them.

“All we did was deliver his package, he was in the house at the time. It was a quick stop and as soon as we were leaving he ran out his house cursing and threatening us,” one of the men allegedly wrote on a GoFundMe page set up for the workers. “While we were looking confused we just apologized for being on his yard but he keep going on then kept saying he would whoop our black asses and then he told his wife to call the cops.”

The worker said they “go through racism every day on that route in Leesburg but he was the first one to actually come up and actually threaten us.”

In the Twitter thread, @Toniob38 also explained that he isn’t holding a grudge against FedEx for the firing but now worries about how he will provide for his daughter.

“I really appreciate the job opportunity i had with FedEx .. no hard feelings but i pray i can get back on my feet because i have a daughter now,” he wrote.

Neither @Toniob38 nor the moderator of the GoFundMe page immediately responded to the Daily Dot’s request for comment.

Many expressed outrage and concern over allegations that FedEx terminated the workers’ employment. “@FedEx really is this what y’all stand for? Supporting racists over your essential workers in the middle of the pandemic,” one user commented.

A #BoycottFedEx movement has gained momentum on Twitter in response to the incident, and the GoFundMe page has a goal of raising $75,000 for the workers.

“These two FedEx employees were fired simply for doing their job,” the fundraiser’s description reads. “We’ve spoken to both former employees and they will be grateful for any type of support as they transition to finding a new job.”