What’s with the ‘dadification’ of Tim Kaine?

In 2004, the emblematic phrase of George W. Bush’s presidency was: He’s the “guy you want to get a beer with.” In fact, that year one poll calculated 57 percent of undecided voters would rather have a beer with Bush than his opponent, John Kerry. The issue at stake was relatability, and it was one that Kerry supporters and other liberals derided.

Though Bush was never the humble Texan he branded himself to be (the Bushes are from New England), the “guy you want to get a beer with” trope turned into a full-fledged cliché, enough so that it became a lyric in the hit musical Hamilton (in reference to Aaron Burr’s presidential run). Ultimately, the whole thing became an argument of class—being swayed by likability showed a lack of it, while “educated” voters were more attuned to a candidate’s intelligence and qualifications and not just surface personality traits.

In 2016, likability is still an issue—but it’s taken a new form. Meet the “dadification” of politics. And this time it’s liberals who are embracing it.

When Virginia Senator Tim Kaine was announced as Hillary Clinton’s vice presidential pick, the reaction was an overwhelming “meh.” There was the sense that this was a safe, middle-of-the-road choice for Clinton—not bad, but certainly not one super inspiring to the far left.

However, during his speech at the DNC, Tim Kaine became our dad. And Tim Kaine was into it.

Tim Kaine. The Dad of dads. The kind of dad that will ask after the game 'ice cream for dinner? But don't tell your mother' #ClintonKaine

In his speech, he directly criticized Donald Trump, spoke about his blue-collar upbringing, and pledged his dedication to social justice. But the reaction online was that Kaine was our adorable, bumbling father, an affable fellow just trying to do good by his family. All of a sudden, he went from “sure, I guess” to totally likable.

The dadification of Kaine hit its peak last weekend with the publication of Tim Kaine Is Your Nice Dad by Sara Benincasa, a work of fan fiction available on Amazon for $2.99, half of the proceeds of which go to Great Expectations (an organization run for many years by Kaine’s wife, Anne Holton).

The work imagines Kaine in various daddly situations, with chapters like “Tim Kaine Did Not Bring You on This Haunted Hayride so You Could Throw Apple Fritters at Your Sister,” and “Tim Kaine Wants Your Friend to Know They Can Always Stay in the Bonus Room if They Need to.”

Benincasa says she didn’t know much about Kaine before his VP nomination but his dad-like qualities were readily apparent. “He seems like a good dad. Like a sitcom dad. The kind of guy who always shows up and who cares about you,” she told the Daily Dot over email. “Now is that reality? I believe it is. But I don’t know him. So what I believe doesn’t really matter. What I can say is that I would not have created this particular character for this particular book if I did not think it had some pretty deep connective tissue to who this man really is.” 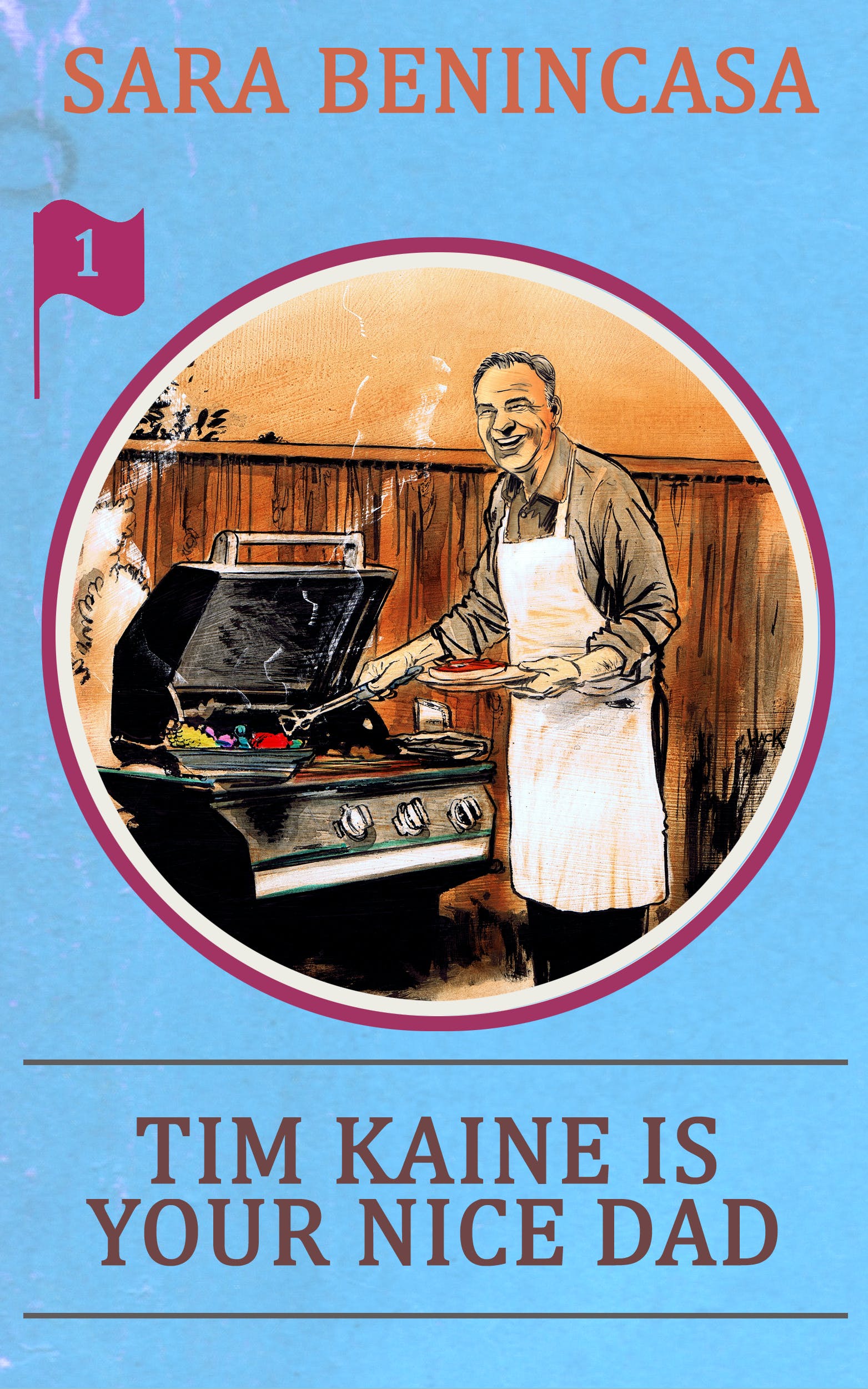 The past few years have seen an explosion of dad humor, from the obsession with “dad bod” to the Dad Jokes subreddit to the Toast’s “Dad Magazine” (which, full disclosure, I co-wrote). So it makes sense that the metaphor for likability we’ve chosen for our politicians has been “dad.” It certainly didn’t start with Kaine. President Obama is regularly lauded for his dad-like qualities—cracking jokes, embarrassing his daughters, wearing unfashionable jeans.

Every president up until now has been a father, and yet not all of them has been a “dad.” That’s because the dad of our collective fantasies carries specific qualities. He’s not just a man with children, but someone who gets emotional about his children, who goofs around, who welcomes you warmly to his backyard BBQ where he’s prepared steaks using his secret marinade. There’s a reason Benincasa wrote this book about Kaine and not about Mike Pence, who is also a real life dad. “Pence is anti-gay, anti-woman, anti-immigrant. He’s a garbage human. Kaine’s a good guy,” she says. He’s the kind of dad we want, but not necessarily the kind we have.

Likability, on the other hand, has long been an issue for Hillary Clinton, who has had to push back against misogynistic expectations that women are somehow inherently nice, gentle, and un-opinionated. For fighting the political fight with as much tenacity and fervor as any male politician, she is branded as “shrill” and “cold,” whereas men with the same tendencies are admirably “tough.” Politicians don’t always have to be likable, but women do.

Clinton’s struggle for likability has resulted in her own “momification,” though it has a different edge than the one we’ve related to Obama and Kaine. For Clinton supporters, the battle to brand her as “mom” feels like an overcorrection, a battle to prove that she’s relatable. And it hasn’t gained as much traction.

Hahahahaha she's like a mom trying to be down with the kids https://t.co/lwBwzvXjg3

Everyone who actually meets Hillary seems to love her. Everyone who meets Trump seems to sue him in court. #trust #likeable

It’s strange that the fight for likability is now often coming from those voting Democrat, when beer-drinking Bush (and now, beer-drinking Trump) was such an object of scorn. “I don’t care if a politician is sweet and folksy if his politics are garbage,” says Benincasa, suggesting the sweet and folksy routine only works when you’re already onboard with everything else.

It’s also notable that Democrats are going for “dad” over “guy who drinks beer” (though they aren’t against “once-hot babe,” either). The former maybe appeals to educated liberals in a different way. There’s something wholesome, middle-class, and often white about that fantasy. The scorn for the beer-drinking guy could be because it connotes lower-class activities. (On the flip side, in 2004 Republicans pointed to John Kerry’s enjoyment of wine as proof of his elitism.)

Ultimately, the dadification of politicians results in a lot of all-or-nothing rhetoric. It’s not enough to just support a candidate, now you have to be part of their fandom. Hillary Clinton is #squadgoals, Joe Biden is a meme, and Barack Obama is bae.

A politician is supposed to represent the views of the people, someone who will enact our collective will. But the fandom of politics seems to invert that process. Now there is a cult of personality, and this person is no longer being held responsible for anything but themselves. Support has turned to “love,” which makes it hard to be critical. Someone criticizing your mom inspires defensiveness in a way someone criticizing an elected official does not. And it’s harder to be disappointed in Dad than it is a man you don’t know.

If anything, the dadification is a performance, a way to speak about political excitement in an informal space, while reserving the deeper analysis for elsewhere. People have always thrown themselves behind politicians, and the dadification may just be what that looks like now. And perhaps there are some deeper similarities. Both parents and politicians will, at some point, let you down.