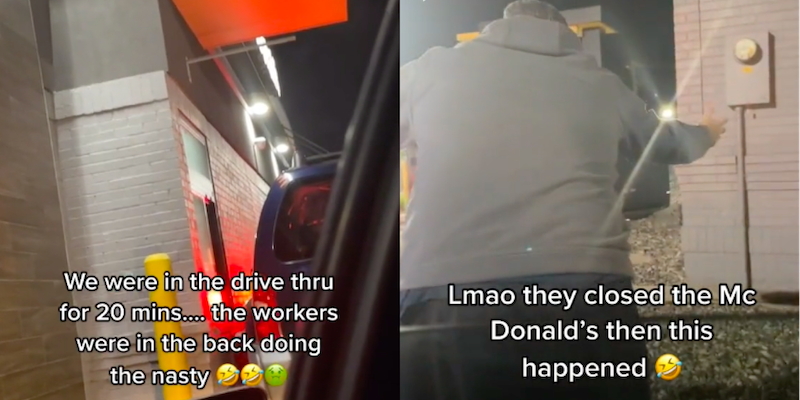 ‘Hey! I’m waiting in your f*cking line, a**hole?‘: Customer yells at McDonald’s workers who were allegedly ‘doing the nasty’ while they waited in drive-thru for 20 minutes

'They were doing the McNasty.'

A TikToker filmed a video while allegedly waiting in a McDonald’s drive-thru for 20 minutes because the workers were allegedly having sex.

The overlay text in the video alleges, “We were in the drive-thru for 20 mins… the workers were in the back doing the nasty.”

The video starts with a voiceover reading the text, and then a man in the vehicle in front of the TikToker’s shouts through the window while hitting it: “Hey! I’m waiting in your fucking line, asshole! The fuck are you doing? Come on, asshole!”

The man yells from his car to the workers inside as the TikToker films and laughs.

Since being posted on Nov. 4 by @pnaomii, the video has gained close to 2 million views and over 370,000 likes. The TikToker posted a follow-up video almost a week later, showing the aftermath of the first video.

In the second video, the text says: “Lmao they closed the McDonald’s then this happened.” The man featured yelling in the first video is now out of his car, telling the people behind him to back up. He seemingly grows more and more frustrated as the people in the last car start yelling back at him. That short video has over 441,000 views.

The Daily Dot reached out to @pnaomii but did not immediately hear back.