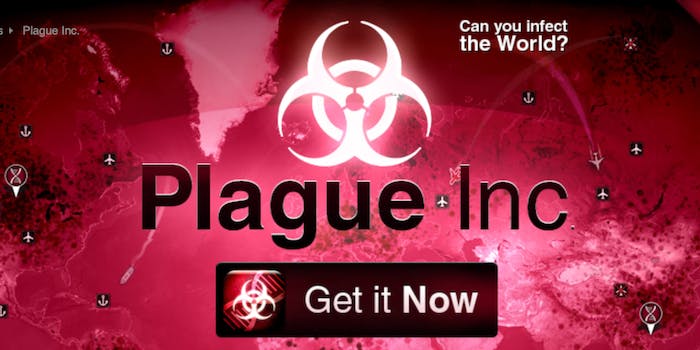 The game's developers have issued a statement asking players not to take the game too seriously.

As the world works to contain coronavirus, downloads of virus-inspired video games are surging online.

According to a report from the Washington Post, games like Plague, Inc., which simulates a mass pandemic, have soared to the top of app stores in the U.S. and China.

The Ndemic Creations game, released in 2012, is a role-playing game wherein players take the role of a pandemic pathogen. After infecting “patient zero,” players must grow their pathogen into a “deadly, global plague” while adapting to humanity’s attempts to protect itself.

Game developers and researchers told the Post that the popularity of the game makes sense as people are trying to cope with their fears.

USA Today reports that Plague, Inc.’s developers warned players not to “take the game too seriously.”

“Please remember that Plague Inc. is a game, not a scientific model and that the current coronavirus outbreak is a very real situation which is impacting a huge number of people,” Ndemic Creations’ said in a statement. “We would always recommend that players get their information directly from local and global health authorities.”

Ndemic Creations also said the game was created to be “realistic and informative, while not sensationalizing serious real-world issues.”

Video game historian Carly A. Kocurek told the Washington Post that the role of games in cultural expression allows them to function as a coping mechanism.

“For some people, horror films are a way to deal with anxiety, and games can be, too,” Kocurek said.

According to a CDC Public Health Matters blog post about Plague, Inc., the founder of Ndemic Creations, James Vaughn, said he was inspired to create the game by the 2008 flash hit Pandemic 2.

The premise of the Pandemic game series is the opposite of Plague, Inc. Players are fighting a pandemic rather than cultivating one.

Wired also reports that the game was briefly taken offline “due to very high player numbers.”

During the 2014 Ebola epidemic, Ndemic Creations issued a statement asking players to donate to charities engaged in fighting Ebola.