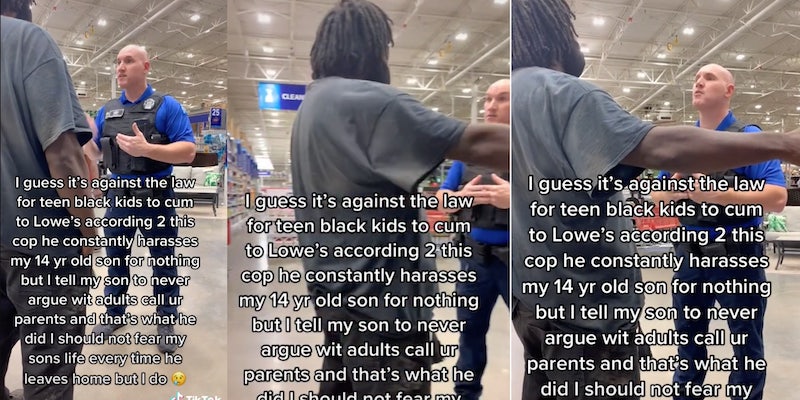 ‘I should not fear my sons life every time he leaves home:’ Black teen tries buying a soda at Lowe’s, cop says he’s ‘trespassing’

In the video, the police officer—whose badge is illegible due to his distance from the camera—insists to the teen’s father that the home improvement store has issued a trespass warning against him, and he therefore can no longer enter the store. The video was filmed by the boy’s mother, @mrsweirdomckinney.

She wrote that her son had been riding his bike in the area with some friends, and that they had come into the store to purchase a beverage. It’s not clear when she and his father came to the store to figure out what was happening. In a follow-up video, she asks someone who she claims is a manager if there were any issues with her son at the store, to which the manager replies, “no.”

The video is captioned, “I guess it’s against the law for teen black kids to [come] to Lowe’s according to this cop. he constantly harasses my 14 yr old for nothing but I tell my son to never argue with adults call your parents and that’s what he did. I should not fear my sons life every time he leaves home but I do.”

Some commenters expressed frustration with the situation, saying that people browsing in a store is nothing new, and taking issue with the way the police officer in the video phrased his objection to the poster’s son being in the store, saying that teens shouldn’t be in a store because they “won’t buy anything.”

One commenter wrote that they send their son out to the store without a parent for multiple reasons.

“I’ve sent my son to several stores without me due to multiple reasons.” they wrote. “Let this happen to my son, please.”

Others shared the view that the boy had been rightfully issued a trespass warning, siding with the police officer.

“If they have been previously warned not to be on the premises they can be arrested for Criminal Trespass,” one commenter wrote. “Officer was 100 correct.”

The Daily Dot has reached out to both Lowe’s and @mrsweirdomckinney about the videos.