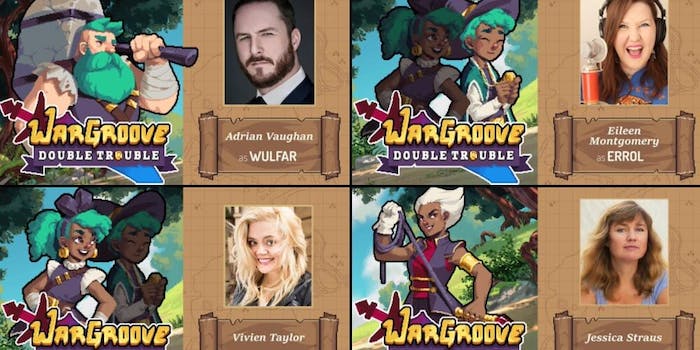 The company says its announcement was 'insensitive and poorly communicated.'

Video game developer Chucklefish is receiving backlash online after casting white voice actors for a game with characters of color.

The incident began last month when the Twitter account for Wargroove, a turn-based strategy game, revealed the actors it had hired to voice the main characters in its free downloadable game Double Trouble.

They've got war cries, taunts and loads of grunt options; it's the voice actors behind everybody's favourite Outlaw faction!

Despite three of the four highlighted characters being women of color, all the voice actors chosen by Wargroove were white.

Fans concerned by the lack of representation in the game have been questioning Wargroove ever since.

soooo you have 3 characters of color but you couldn't find a single voice actor of color? the racism is jumping out here

I’m gonna let you in on something Wargroove; y’done messed up and could’ve left this one in the drafts. Prep your PR message asap lmao

Several voice actors of color also weighed in on the issue, noting that their services were available for games such as Wargroove.

It would have been really awesome to see POC voice actors in these roles! Next time you're looking, I'm a black video game voice actor in London, and there are also brilliant people like @inel, @ninaspage, @SamanthaBeart, and @Abzybabzy here. Plus @simplyundrea, across the pond!

Google makes finding us easy! You can also find soooo many of us on Spotlight, IMDB, even Twitter! Please, no more 'oversights' as an excuse! pic.twitter.com/WitrlsXtHI

Others attempted to defend Wargroove’s hiring decision, arguing that the color of a character’s voice actor was irrelevant.

To y'all saying this is racist, insensitiv, etc.

Please tell me how
Like, why do y'all see a problem in this?
It's just some people voice acting some characters from a game. There shouldn't be a problem

The team behind Wargroove seems to agree that its tweet was an issue. In a statement on Friday, the company apologized for what it said was an “insensitive and poorly communicated” message.

Thank you for your feedback everybody. We have an update here: pic.twitter.com/qM4eY4HrL8

The team added that it didn’t know the voice actors’ skin color when hiring them.

“During our casting process we knew that we didn’t want our own unconscious biases to impact who we hired to work on Wargrooze,” the company said. “We took 2 steps to do this: the first was that we had an external casting management team who helped throughout development, and the second was that we handled auditions blindly.”

Wargroove claims that it purposely did not look at the “profiles, back catalogues, headshots, etc.” of the voice actors and only hired them based on the audio files they sent.

“We also understand that posting photos of our voice actors beside character of color without acknowledgment of the systemic problem of representation in the industry was insensitive and poorly communicated,” Wargroove said.

The company vowed to “be more sensitive” in its future casting decisions and said it would “continue to support the work of all those pushing for better representation of people of color in the industry.”