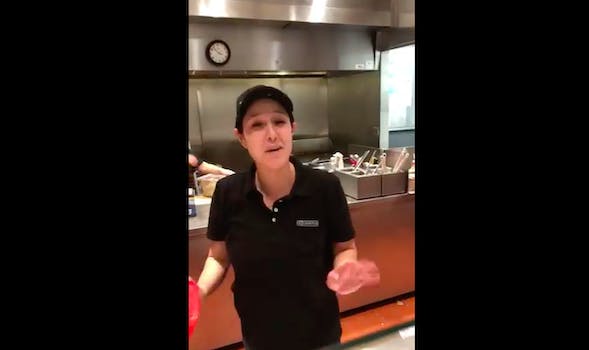 Masud Ali posted a video of the incident on Twitter.

A Chipotle manager has been fired following allegations from a Black customer that he, along with his friends, was denied service at the burrito chain last week. The incident took place in St. Paul, Minn., according to the commentary of the men filming the incident.

The two-minute video was posted on Twitter by user @masudaliii early Friday morning and has since garnered 31,000 retweets and more than 4,000 replies.

The video starts with the manager smiling and saying, “You gotta pay cause you never have money when you come in here.” The manager was later identified by her first name, Dominique, on a GoFundMe page set up for her.

“We never have money,” repeats someone behind the camera in a sarcastic tone.

Though the men behind the camera are still laughing and joking, the situation quickly escalates when a white customer reportedly gets his order without having to pay, according to the commentary from those behind the camera.

Chipotle has since terminated the manager, as they clarified in a tweet on Saturday afternoon:

This is not how we treat our customers. We’re committed to treating everyone equally and with respect. The manager has been terminated and we are re-training everyone at the restaurant to ensure something like this doesn’t happen again. -Shaq

While Ali’s video went viral, some Twitter users shared screenshots of his old tweets in which he bragged about dining and dashing—eating at a restaurant without paying—in the past.

The tweets were unavailable as of Sunday morning, and some of the users tagged in them had their accounts in private mode or deactivated.

Following these tweets, many came out in support for the manager.

Hold on… the girl that works there said that they have cameras insinuating that they have gone without paying before PLUS someone added screenshots of them bragging about not paying for their food so… this ain’t it for me y’all. pic.twitter.com/1XuAhRYHOt

I'll be in tomorrow for free food tomorrow. If you don't give it to me, I'll cry racism.

A Change.org petition was set up to help the manager get her job back.

Ali did not respond to the Daily Dot’s request for comment; however, Chipotle provided the following statement:

Our actions were based on the facts known to us immediately after the incident, including video footage, social media posts and conversations with the customer, manager, and our employees. We now have additional information which needs to be investigated further. We want to do the right thing, so after further investigation we will re-train and re-hire if the facts warrant it.

The incident took place at the end of a year when racial profiling at stores and in public places has been widely recorded and reported, prompted by the unsubstantiated arrest of two Black customers at a Starbucks store in Philadelphia in April. It’s since encouraged many to record their experiences of being racially profiled and to hold people accountable for their racist behavior and attitudes.

Update 11:25am CT, Nov. 20: Dominque said on Twitter on Monday that she has been offered her job back and is grateful for all the support.

Racism is a real issue that I do not take lightly. Racism must be addressed, but what happened here was just wrong. Falsely accused and in return, cut off from a goal that I worked hard for. Today, I was “officially” offered my job back. I’m truly grateful for all the support. https://t.co/83EUsIqt4I