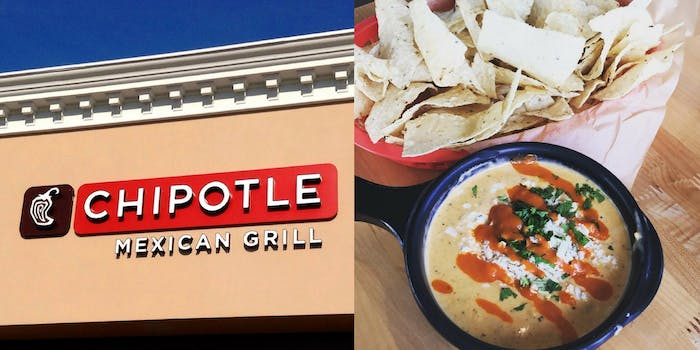 You've gouda be kidding me!

On Monday, the chain announced they’re trying out queso, margaritas, and new salads at its first test kitchen in New York City.

“All of our competitors sell queso, and we know some customers don’t come to Chipotle because we don’t offer it,” Chipotle CEO Steve Ells wrote in an internal memo sent to employees, according to Eater. “But because we refuse to use industrial additives, added colors, flavors or preservatives in our food, it’s very difficult to make queso that meets our standards.”

The proclamation sent Chipotle and queso lovers alike into a frenzy.

Yes, fellow cheese lovers, it's true! @ChipotleTweets made queso! I ate it. I approve. #chipotle pic.twitter.com/rcK1OCTSSd

Chipotle testing queso supersedes all other news today, and in 2017, and in this millennium, and since the dawn of time

However, upon closer inspection, it appears that Chipotle’s queso is no queso at all.

A review from Business Insider has ruled that Chipotle’s cheese product is more of a “chowder,” or even a “cheese sauce” when added to burritos.

“While the typical Velveeta-based dip is smooth and elastic in its cheesy richness, this cheddar-based version has a grainy texture more reminiscent of a roux-based sauce,” the publication ranted. “No Insta-worthy cheese pull here—the queso is viscous and texturally closer to a chowder than nacho cheese.”

Meanwhile, Indianapolis, Indiana news station RTV6 has dubbed the cheddar-y concoction “cheese sauce” as well, which appears to be much more a dig on queso than Chipotle itself.

It would appear that Chipotle’s queso will even forgo the traditional Tex-Mex staple of Rotel (aka diced tomatoes and green chilis) to include chipotle chili, cumin, tomatillo, and garlic. For Queso Ray-all, that sounds pretty fake to me.

So go ahead, Chipotle stans, enjoy your 7-Eleven-esque cheese dip. The rest of us will be over here at a real Tex-Mex restaurant with queso-loaded homemade tortilla chips in hand.