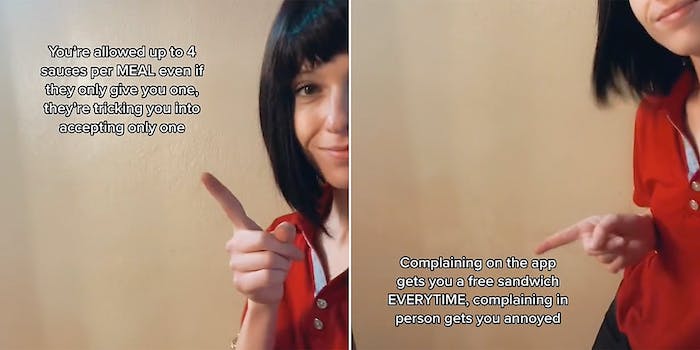 ‘Chick-fil-A come get me’: Worker shares 3 menu secrets after quitting in viral TikTok

'Complaining on the app gets you a free sandwich EVERY TIME.'

An apparent former Chick-fil-A worker shared three menu secrets about ordering after allegedly quitting her job in a viral TikTok.

TikToker Olivia Roberts’ (@sleepyshawtee) video lets viewers know how to make the most out of their order at the fast-food franchise. Captioned “Chick-fil-a gonna get me … come get me,” the 10-second TikTok got over 29,600 views and 513 likes since being posted on Wednesday.

“Chick-fil-A secrets that employees arent allowed to share but I just quit so lets go,” text overlay on the video reads.

The text layover narrates three things she wants viewers to know while dancing to Hall & Oates’ “You Make My Dreams” in uniform.

“You’re allowed up to 4 sauces per MEAL even if they only give you one. They’re tricking you into accepting only one,” she notes, allegedly revealing one of the secrets before continuing to reveal the next. “It’s no one’s pleasure, we all hate our job and they make us follow weird rules that we aren’t allowed to talk about without risking our jobs.”

“Complaining on the app gets you a free sandwich EVERY TIME. Complaining in person gets you annoyed,” she notes, allegedly revealing the third.

Roberts further clarified in the comments section, “If you say you didn’t get enough sauce (on the app) you will get a free sandwich, don’t have to mention names.”

This is the latest of several various Chick-fil-A menu hacks floating around on TikTok.

Some of the noted that rules may vary based on location.

“The sauce rule depends on the location and operator. At my store we will give you however much you want,” user @kegano said.

“Both locations I’ve eaten at gave me food poisoning. I called them and they said it wasn’t their problem,” another user, @wakeupusers, wrote.

Others agreed with it being better to complain on the app rather than in person.

“When I complained on the app I got free cookies,” @usernamehere2021 claimed.

“Order on the app and choose your sauces, you get like three for a large fry and two per sandwich,” another, @humanchacha, wrote.

The Daily Dot reached out to @sleepyshawtee via a TikTok direct message and Chick-fil-A via email.