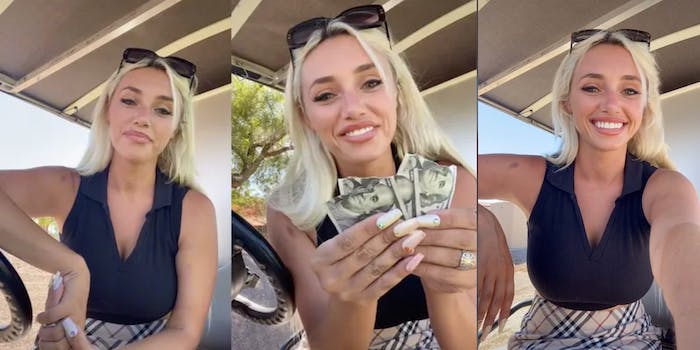 Everyone who works in a tipped industry knows they’ll have to deal with all different kinds of characters. A recent viral TikTok video chronicles a golf course cart girl’s encounter with a sexist tipper.

In a video that has garnered over 1 million views, TikTok user @cassholland holds up what looks like three $100 bills.

“What the hell is this? $300 dollars. In half,” she says and shows that she’s holding three ripped halves of $100 bills.

“You’re probably thinking someone tried to trick me and short me. But oh no, this guy had bigger plans in mind,” says @cassholland.

She explains that after seemingly normal interactions with this golfer, he “asked if I could go to dinner with him,” and when she said that she was busy, he implored, “‘Well cancel your plans and come with me.’” She declined again.

But the man persisted. “And then he takes these out,” @cassholland says, holding up the ripped $100 bills.

The customer offered to give @cassholland three halves of $100 bills and promised the other halves if she met him “in front of this casino” later that night.

“So clearly he already had this whole idea planned out,” @cassholland states.

After the man and his friends left, @cassholland noticed the man placed the ripped cash in her golf cart’s drink holder.

“So now I have this,” she says, holding up the torn money, “Just completely useless $300.”

Working through how to handle it, she says, “At first I was mad, but like, I didn’t really lose anything. He’s the dumbass that lost $300.”

She mused if he’d ever done this before because, “I can understand once you have the three halves you probably want the other ones.”

But @cassholland knows the man is the one on the losing end. “It’s funny because he probably thinks he’s a genius but he really just lost $300. For nothing.”

A few days later, @cassholland posted a follow-up video. “So guess who showed up today?” she asks, laughing. “The guy who gave me $300 ripped in half. Turns out he saw my video and realized what he did wasn’t very smart.”

She says the man gave her the other halves of the bills, saying to her, “‘Well there’s the 300 for you, and you know where to find me if you wanna ruin my night tonight.’”

Holding up the full bills, now taped together, @cassholland says, “You know what would really ruin his night? If I didn’t show up at all. Again.”

She ends her video with a follow up message to the man saying, “Buddy if you’re watching, thank you, but like I said before, I’m going to accept this as an inconvenience fee.”

The Daily Dot reached out to @cassholland via TikTok for comment but did not immediately hear back.