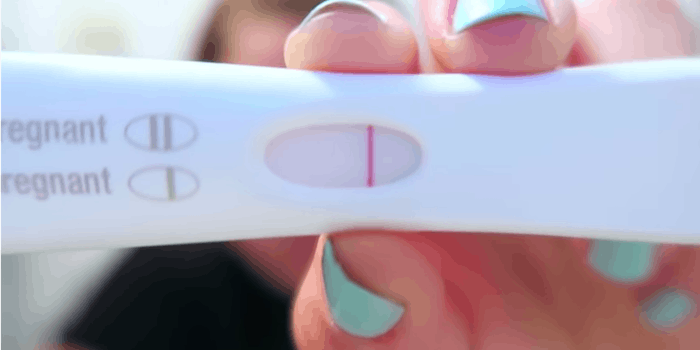 Here’s the real truth about getting pregnant on your period

Get ready to do some math.

One terrifying thing about a human body is that it’s primed to spring surprises on you at any time. If, for example, you thought that menstruation protected you from pregnancy, you would be mostly right—except, of course, for when you’re not. According to the American Pregnancy Association, the frustrating answer to the question “can you get pregnant while on your period?” is both yes and no.

So glad we’ve cleared things up!

What the APA means to say is, yes: It’s possible to get pregnant during your period. The probability of that happening, however, is very, very low. And period sex can be great. So in order to have it safely, here’s what you need to know.

How can you get pregnant on your period?

Like so many annoying things in life, this is a math problem: The average, 28-day menstrual cycle begins on the first day of consistent bleeding. Typically, that bleeding lasts between three and seven days, followed a few days later by the cycle’s most fertile moment—ovulation, often occurring between days 12 and 16, with fertility theoretically peaking on day 14. Post-ovulation, the egg can be fertilized for 12 to 24 hours.

Sperm, meanwhile, can live inside your internal plumbing for as many as five days.

A person whose body keeps the clock described above could, hypothetically, have unprotected vaginal intercourse to completion up until the last day of their period at low risk.

What if I track my menstrual cycle?

If you keep vigilant tabs on your menstrual cycle and know it unflaggingly adheres to the 28-days plan, congratulations—I’m still not going to tell you to have unprotected sex, though. During your period, your cervix is more open than usual, making you extra susceptible to sexually transmitted infections. Condoms are recommended.

Many menstrual cycles fall outside the projected 28-to-30 day range, and therein lies the biggest problem: If you’re operating with a shorter-than-average cycle, the window between menstruation and ovulation is smaller. Sperm’s longevity, rudely enough, remains unchanged, elevating the risk of pregnancy in this scenario.

And then, many people spot between periods, which can make a menstrual cycle difficult to track. Some people have erratic periods that descend whenever they damn well please, which makes this math frankly impossible.

How can you tell when it’s safe to have sex?

Generally, though, the lowest risk moment in the menstrual cycle, pregnancy-wise, falls during the week or so right before your period. According to the APA, it’s safe to assume the fertility window is open between days 11 and 21 of your cycle. For those who really really want to have period sex (again, no judgment, there exist a bevy of very compelling reasons to have period sex), the earliest, bloodiest days are probably your best bet.

To be clear, though, just because it’s possible to get pregnant on your period doesn’t mean you will. It’s rare.

But conception concerns aside, some people report that cycle awareness helps them make the most of hormone-related peaks and valleys in productivity. Some even say it makes for less painful periods. And while fertility awareness methods of pregnancy prevention are imperfect and certainly less effective than many other contraceptive tools on the market, those who are actively trying to conceive could certainly benefit from familiarizing themselves with their menstrual cycles. Apps like Clue and Period Tracker offer quick and convenient ways to do that, although more precise methods exist, too.

Still freaked out about period pregnancy?

If you and your partner aren’t mutually monogamous, STI-tested and cleared, and you aren’t using a backup contraceptive, I’ll continue to sing the praises of condom use—and even throw some suggestions your way. You can get pregnant on your period, so protection is a must.

Still looking for clarity? Here’s what you should know about the morning after pill, all the best birth control options, the ultimate guide to getting consent, and the most important facts about IUDs. Plus, read up on the history of birth control.