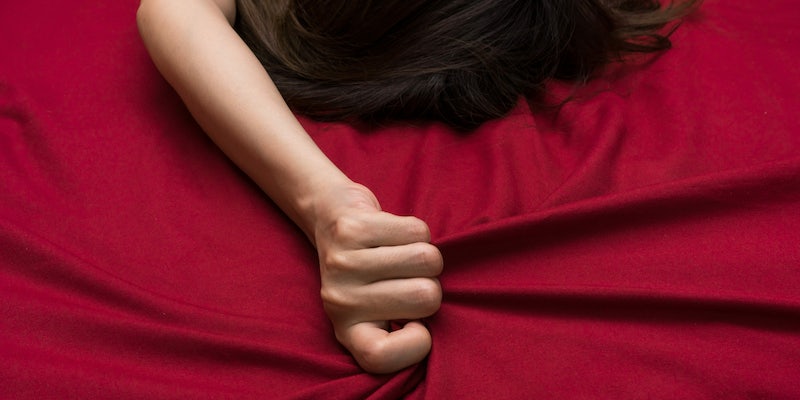 If you’re not having period sex, you’re missing out

Let's take the stigma out of menstruation—and have better orgasms while we're at it.

Listen, typically I wouldn’t tell you what to do, but typing some variation of “should I have period sex” into Google tells me you’re looking for input. Here’s mine: Have period sex. If you are in any way on the fence about that, I think you should just go ahead and do it.

Why you should have period sex

Period sex is extremely similar to regular sex, except, yes, OK, it can get a little messy. But such is sex. Your sheets end up flecked with sweat and spit and maybe semen—unless, oh God, you bought this product—and none of those secretions stop any of us from doing it.

Perhaps you are saying to yourself, “But with period sex, there will be blood, and blood is so gross! Especially menstrual blood, with its occasional clots and tissue clumps! And it’s going to be everywhere, my entire bed smeared with rusty streaks like a crime scene someone forgot to clean up!”

Cool it: The average period means about one to one-and-a-half ounces of blood lost, with a heavy period likely clocking in under three ounces. That’s over the course of days, mind you. There may not even be any blood at all, but its specter often eclipses the fact that, for many menstruators, period sex feels extra good.

Oh, you remark, eyebrows pricking up in interest. Why’s that?

Sex on your period could feel better

At that time of the month, one’s undercarriage is—duh—flooded with blood, and that elevated circulation can make the clitoris, labia, and vagina more sensitive and potentially more responsive. In addition to experiencing hormonal surges that often up the libido, a person might also be more aware of their vagina than usual—because it’s leaking blood, and because all that blood might make things feel heavier than the norm. More full. Certainly more lubricated. All of which may well mean that, from the outset, a menstruating vagina is primed for sex, should its owner feel so inclined.

On top of the very compelling reason that sex is better, orgasms might also help relieve menstrual pain and shorten the length of a period. Orgasms cause uterine contractions, speeding along the uterus’ process of shedding its lining and flushing out the chemicals that cause menstrual cramping.

The Sex MD speculates that the menstruating uterus’ hyper-sensitivity can translate to more intense orgasms (yes, please) but orgasms of any magnitude cue the brain to release oxytocin, a hormone that both encourages bonding and acts as a strong natural pain reliever. Would you rather slap a heating pad on your crampy uterus and weather the storm, or climax your way to a lighter period?

Having sex on your period is sex is still sex, period

What’s most important is that you and your partner are comfortable and communicating. Getting your period can make you feel lethargic and cranky and very, very reticent to move. This is fine. Your partner can do the legwork, unless your partner is also menstruating, in which case you can strike a compromise. If you’re having penetrative vaginal sex, though, just make sure to use a condom, because, yes, you can get pregnant while on your period, and, yes, your open menstruating cervix is more susceptible to sexually transmitted infections.

Those two minor provisos aside, period sex serves another oft-overlooked purpose that bears mention. The reason most people Google “sex during period” is likely rooted in some sense that sex while menstruating is gross, if not for the menstruator, then for their sexual partner. At the heart of that sentiment is the widely held view that menstruation is, in itself, disgusting—something shameful and embarrassing that should be kept separate from sex. This is a stigma that needs to be broken.

Worldwide, culturally constructed taboos around menstruation keep too many women and girls out of school, out of work, and sometimes out of their homes for roughly one week each month, if not always engendering tragedy, then holding those girls and women back. Without inflating your sex life into a human rights issue, I’d argue that it’s important to do the daily work of eroding those taboos—normalizing the period so that it’s viewed as the deeply average biological function that it is, rather than a barrier to work or education or any other part of daily life.

When it comes to recasting menstrual blood as just another bodily fluid, as unsurprising as sweat or spit or semen, sex seems as good a means as any. Better even, considering all the aforementioned benefits.

Of course, the sanguine-averse may find reversing their feelings harder than simply listening to a stranger’s advice. But according to science, the revulsion you’re anticipating might not even surface when you’re actually doing the deed: A 2012 study out of the Netherlands found that women were a lot less bothered by generically disgusting things when sexually aroused. Who knows, maybe you will get so lost in all the sensations that you’ll find yourself finger painting blood hearts on your partner, just like this man did.

No one is saying you need to go that far, but truly, you have nothing to lose; unless you’re a person who faints at the sight of blood, a little period sex won’t hurt you. So what are you waiting for? Put a towel down and hop to it.