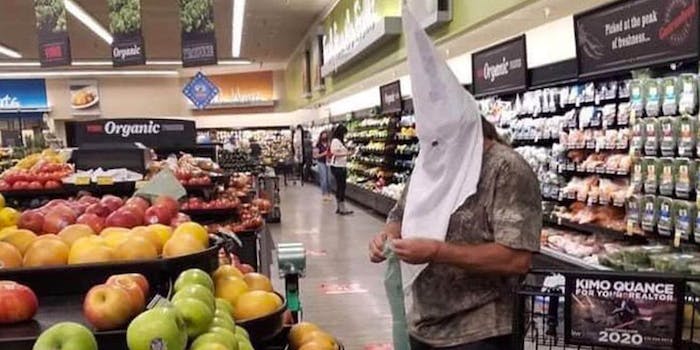 'I took the photo because I couldn’t believe what I was witnessing.'

A man in California shocked and enraged shoppers over the weekend after showing up to a grocery store wearing a Ku Klux Klan (KKK) hood.

The unidentified individual, who was seen at a Vons store in the city of Santee, California is believed to have been using the mask as a face covering.

A woman who photographed the individual explained to the Times of San Diego that she was in “disbelief” at the man’s actions.

“I took the photo because I couldn’t believe what I was witnessing,” said the woman, who identified only as Melissa S. “I’ve grown up in Santee and have never seen such racism right before my eyes.”

To make matters worse, Melissa claims that another man in the store appeared to celebrate the atrocious display.

“He was behind me in line. Standing quietly,” she added. “A man in a wheelchair [went] past and saluted him, and he laughed.”

A Vons spokesperson called the incident “shocking” and stated that the man was asked by employees to remove the hood.

“Several members of our team asked the customer to remove it, and all requests were ignored until the customer was in the checkout area,” the company said. “This was a disturbing incident for our associates and customers, and we are reviewing with our team how to best handle such inappropriate situations in the future.”

In a press release on Monday, the San Diego County Sheriff’s Department confirmed that it was looking into the matter and would “pursue any appropriate criminal charges.”

“The Sheriff’s Department does not condone hate or any acts of intolerance in our communities,” the statement said. “We are a county that is welcoming of people from all backgrounds.”

The department is encouraging anyone with information on the incident to reach out.

“Santee, its leaders, and I will not tolerate such behavior,” Minto said. “Santee and its citizens are great, and this particular individual’s actions are not representative of us as a people and a wonderful city.”