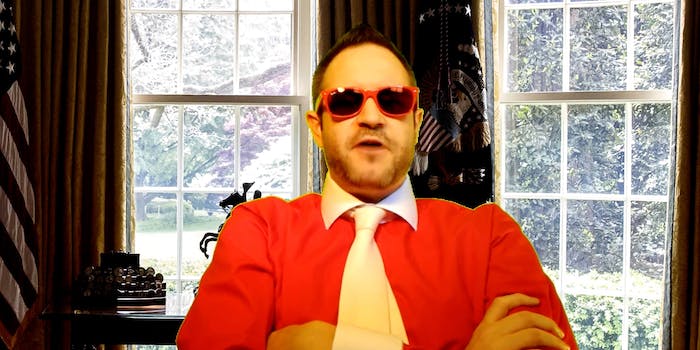 At a rally in Phoenix hosted by Sen. Bernie Sanders (I-Vt.) on Thursday night, footage from attendees shows a man in the elevated area behind Sanders unveil a Nazi flag while Sanders is speaking. The man is a self-identifying Nazi YouTuber.

The act was a hate crime that seemed to attack Sanders’ Jewish heritage.

According to Twitter user @ladawn, the flag was forcefully taken from the man by another attendee as the man was ejected from the rally.

Although it was later confirmed that Sanders never saw the flag, he was made aware of it shortly thereafter and had this to say regarding the commotion the protester incited, via BuzzFeed News’ Ruby Cramer: “Whoever it was, I think they’re a little outnumbered tonight.”

The narrative of Sanders’ mean online supporters has long been a part of the online discourse. The incident was seen by some as an example of actually dangerous harassment as others attempted to trivialize the situation.

“A Nazi flag to harass the man who would be the first Jewish president. Don’t talk to me about emojis hurting your feelings and Bernie’s supporters being uniquely bad,” wrote Kyle Kulinski, host of the Secular Talk YouTube channel.

Footage also shows the perpetrator of the incident after he was thrown out shouting racial slurs at people outside the rally.

The perpetrator has self-identified as Nazi YouTuber Robert Sterkeson through his channel. “This is me at a Bernie Sanders rally unfurling the Swastika behind him right as he came out. Footage on tomorrow’s episode!” wrote Sterkeson through a post on the channel.

A video where Sterkeson makes death threats was uploaded on Nov. 6, 2018, and has not been removed by YouTube for its clear community guidelines violation. “Let’s make America white again,” says Sterkeson to close out the video.

The rest of Sterkeson’s YouTube content is mostly gameplay videos with various references to “clown world,” a racist dog whistle and meme of the so-called “alt-right,” a loosely centralized collective of white supremacists. Sterkeson admits that if he uploaded more political content to YouTube, he would be banned. Due to this, he uploads the majority of his political content to BitChute, a video-hosting alternative that houses his videos such as “The BombIslam.com Show” and “New Zealand Christchurch mosque shooting… in Minecraft!”