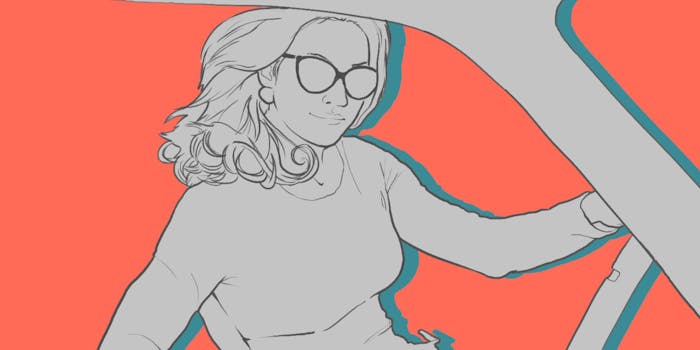 Cruz and Jenner are no longer best buddies.

Caitlyn Jenner has remained an avowed Republican since her famous coming-out in summer 2015.

She even likes Ted Cruz. In a March interview with The Advocate, Jenner surprised many in the LGBT community when she said so—even adding that she would like to be Cruz’s “trans ambassador.”

But by now, Jenner has witnessed Cruz’s many anti-transgender, anti-LGBT rights comments on the campaign trail. And the most powerful transgender celebrity of our time is done making generous gestures to the presidential candidate.

On Wednesday night, Jenner posted a video to her Facebook page that showed her using the women’s bathroom at a Trump hotel in New York—and she took the toilet trip as an opportunity to publicly shame Cruz.

In the Facebook video, Jenner notes that Trump once told her she was welcome to use the restroom of her choice while visiting his many branded properties. After her restroom exit, she turns toward the camera with a message for both.

“Thank you, Donald, I really appreciate it,” quipped Jenner. “And by the way, Ted, nobody got molested.”

Over the weekend, Cruz mocked trans people at a string of campaign rallies by referring to them as “Donald Trump dressed up as Hillary Clinton.” He has also repeatedly employed the conservative mythology about trans people as bathroom child molesters. In response to these ideas, Jenner has recently ramped up her response campaign to #flushdiscrimination.

The potty prank was posted to Jenner’s Facebook profile just one day after a similarly-themed Facebook Live interview with the New York Times. In that video, Jenner tried to break down the divide between conservatives who seem obsessed with the concept of trans predators, and the people most directly affected by the so-called bathroom bills that are sweeping the state legislatures.

“There are no cases of trans people in restrooms ever being arrested, ever having any problem,” Jenner told the New York Times. “They just wanna go in and take a pee and get out of there.”