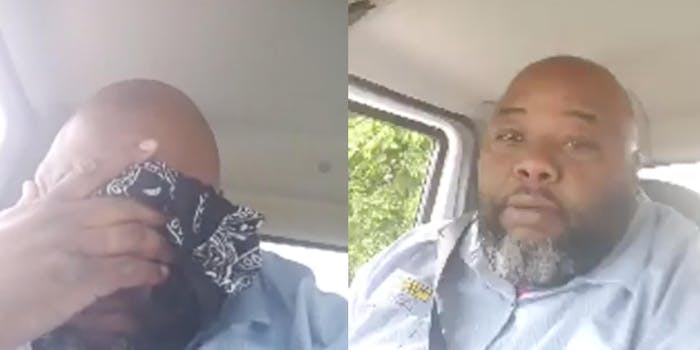 He was trying to leave after delivering a package.

The delivery driver, Travis Miller, was delivering some packages to an Oklahoma City home with his coworker. They gained access to the gated community via code, which the resident receiving the package provided. By the time they were blocked by the “concerned citizen,” they’d already completed their job and were attempting to leave the community.

As Miller and his partner made their way back to the gate, they were blocked by a man claiming to be the president of the neighborhood’s homeowners association. The man, who was later identified as David Stewart, exited his car and began questioning Miller.

In a lengthy dispute that stretched for more than 30 minutes, Stewart continued to block Miller and his partner from leaving. Soon after Stewart approached the vehicle and began asking how the duo had gained access to the community, Miller began recording on Facebook Live.

The resulting video, which initiates after the confrontation with Stewart has already begun, is nearly 40 minutes long. It shows Miller as he calmly remains in his vehicle, watching Stewart as he paces the area and calls police. Miller told local station KOCO-TV that Stewart blocked his vehicle, exited, and immediately began questioning him.

“Flagged me down and just began to throw out a barrage of questions. ‘What are you doing here? Why are you in here? Where are you coming from?'” Miller said. He declined to answer Stewart’s repeated questions, noting in the video that he was leaving the property anyway.

Miller remained cautious throughout the confrontation saying that he was fully aware of Black men who have been shot and killed just for “existing while Black.” He never exited his vehicle. “I was gripping the steering wheel, and I made sure I kept my seat belt on,” Miller told KOCO-TV. “I locked the doors, tried to keep the window up.”

By the time Stewart and a second man—who joined him early in the exchange—had left, Miller was noticeably shaken. He struggled to contain emotions that, according to Complex, were spurred in part by the recent deaths of three separate family members in a single month.

“I knew if I get out this truck, no matter what happened, I would have been in the wrong,” Miller said. “I always say to myself, ‘I’m going to go home to my wife and my kids.’”

Finally, after more than 30 minutes had passed, Stewart and the other man allowed Miller to leave. Before exiting the community, Miller called police to be sure that doing so would not be considered fleeing the scene. The homeowner who received the package was immensely apologetic, according to Miller, saying that there was “absolutely no need and no call for that to happen.”

Miller noted, once he and his partner were safely out of the community, how touched he was by the outpouring of support he received online. Comments on his Facebook Live vary between fear for his situation, kudos for how he handled it, and anger over the confrontation in general.

The Daily Dot did not hear back from Miller by the time of publication.