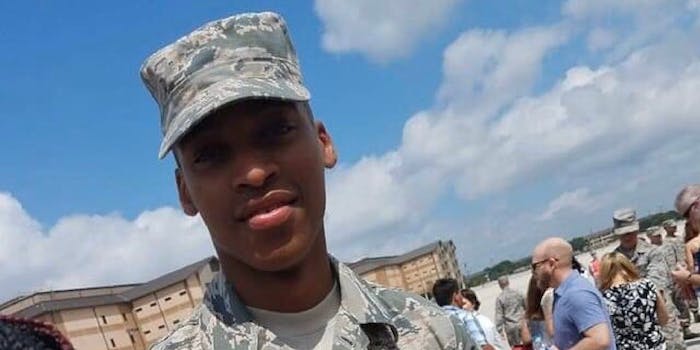 'Y'all really think I'm going to believe any of this?'

A man was fatally shot by police while live-streaming on Wednesday in Indianapolis, Indiana.

The victim has been identified by his family as 21-year-old Sean Reed. A clip of the stream was obtained by TMZ. The erratic two-minute video begins with Reed behind the wheel of a car.

Clearly confused, Reed can be seen questioning his whereabouts.

“Is this Michigan,” he questions. “What street is this?”

Reed continues to question his whereabouts before deciding to park his vehicle.

After Reed parks, he exits his car and begins making his way down the road. The next several dozen seconds of the video appear to pass from within his pocket as he runs.

When Reed finally produces the camera, viewers get a brief glimpse of clear blue sky, a grassy field in the background, and an upshot of Reed as he continues to run. Moments later, a voice can be heard commanding him to stop. In response, Reed begins to say “f*ck you,” before groaning in pain and tumbling to the ground.

His phone tumbles out of his hand moments before the gunfire begins, but it continues to record. During the video, at least 12 gunshots can be heard.

Several other videos have been shared to social media, primarily by people who had been watching the live stream. Many of these videos continue far past TMZ’s recording and capture police officer’s reactions as they reach Reed. In the first moments of one of the videos circulating online, a voice can clearly be heard saying, “It’s going to be a closed casket, homie.” (The Daily Dot was not able to independently verify the video.)

Police claim that a stun gun was used on Reed before traditional firearms were employed.

An interview with police spokesperson Chris Bailey has been making the rounds as well, as people on social media process Reed’s death. In the brief interview, Bailey explains that Reed was being pursued due to reckless driving.

Bailey notes that police said Reed fired shots first, forcing the officer to return fire. Social media users have pointed out that in the video all of the shots are approximately the same volume. If a shot was fired closer to the camera, it seems very likely that it would have discharged at a far higher volume than the distant officer gunfire, they said.

Many people online found Bailey’s explanation lacking. They shared recordings of the police’s live stream explanation alongside their thoughts on the incident.

“He’s over here stumbling over his words and sounding like he’s trying to figure the story out for himself,” one commenter wrote of Bailey. “And y’all really think I’m going to believe any of this.”

Meanwhile, other people used Twitter to honor Reed. They shared photos and memories on social media, working to bring attention to how he lived his life.

“I knew Sean, he was my friend,” one user wrote alongside a photo of Reed in military fatigues. “He was my wingman in basic training. Me, him, and our crew would always talk about what we wanted for our future. Today I find out he was murdered in cold blood for being Black in America. A father, son, brother, and a U.S. Veteran.”

In the hours following Reed’s death, demonstrators flooded the streets to protest his end. They chanted “murder” and “no justice, no peace” at police officers.