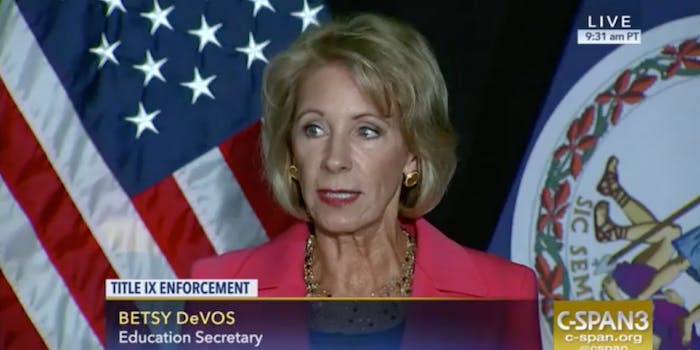 Say goodbye to Title IX as we know it.

Secretary of Education Betsy DeVos will review and replace the Obama-era Title IX protections regarding how college campuses should report and investigate sexual assault.

During her Thursday announcement on the policy, Devos said that based on anecdotes she’s heard, the current Title IX protections have failed sexual assault survivors, as well as students accused of assault.

The Title IX guidance, issued in April 2011 by the Obama administration, is known as the Dear Colleague letter and includes directives for campuses such as designating Title IX coordinators and enforcing investigative procedures for reports of sexual assaults.

“The era of ‘rule by letter’ is over,” DeVos said, speaking at George Mason University in Arlington, Virginia.

While DeVos shared stories of survivors who said they felt burdened to make sure their universities followed through with the guidance, or who felt their school mishandled investigations, she also shared the stories of men accused of sexual assault or harassment, and said that the accused “must know that guilt is not pre-determined” by campuses making accommodations for survivors.

Specifically on sexual harassment, DeVos said that schools have been given “too broad” a definition for what is considered sexual misconduct and that this definition has consequentially affected “too many people” who have just wanted to speak their mind under the First Amendment.

“If everything is harassment, then nothing is,” DeVos said.

While DeVos gave no concrete details regarding the timeline of the guidance’s repeal and replacement process, she said the department’s Office of Civil Rights would be seeking public comment, as well as guidance from medical experts, counselors, law enforcement, and clergy.