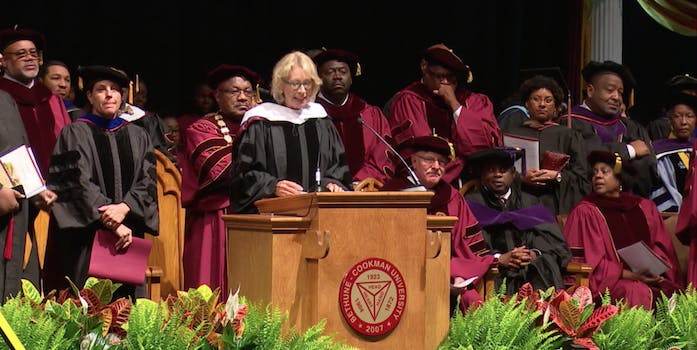 50K people had petitioned DeVos speaking at the college.

On Wednesday, the spring class of 2017 graduated from Bethune-Cookman University, a historically black college in Daytona Beach, Florida.

And despite the petition of thousands, the graduating class also listened to a keynote commencement speech by Secretary of Education Betsy DeVos, who also received an honorary degree from the university.

According to the Washington Post, more than 50,000 students, alumni, and university supporters signed one of three online petitions demanding university leaders to drop DeVos from the commencement ceremony. On Tuesday, protesters, led by 2010 graduate Dominik Whitehead, brought the petition to administrators.

Whitehead told the Post that he grew up hearing stories of activist Mary McLeod Bethune, the school’s founder, and personally didn’t have an issue with having DeVos come speak. He did, however, think DeVos didn’t appropriately represent the school at the commencement ceremony.

“Do not use Bethune-Cookman as a photo op,” he said before delivering petitions to the administration building. “Come to the table with something that is going to actually do something, in terms of policy, funding.”

Other students speaking with the Post and posting on Twitter expressed shock and disagreement with the university’s allowance of a contentious figure such as DeVos. And understandably so—over the months following her confirmation as education secretary, DeVos and the Trump administration have received significant critique from leaders and students of historically black colleges and universities (HBCUs).

In February, critics slammed DeVos for praising HBCUs as pioneers for “school choice,” when historically, HBCUs were established in order to educate black students unable to attend prominently white institutions because of segregation. That month, Howard University was vandalized after DeVos quietly met with the university president following a seemingly purely photo-opportunistic meeting that President Trump took with more than 100 HBCU leaders and presidents.

Then, earlier this week, Trump signed a statement on government spending that suggested financing HBCUs on the basis of race and ethnicity could be unconstitutional. Trump later backpedaled, according to the Post, delivering a statement of “unwavering support” for HBCUs.

After receiving backlash from DeVos’s speaking announcement, university president Edison Jackson wrote in a letter that an engagement of differing viewpoints is necessary for education, and that he did not think students would be benefitted by suppressing voices they disagree with, the Post reported.

“If our students are robbed of the opportunity to experience and interact with views that may be different from their own, then they will be tremendously less equipped for the demands of democratic citizenship,” Jackson wrote.

In opening her speech, which could be streamed live from the university’s website, DeVos gave her recommitment to HBCUs from the Trump administration.

“We support you, and we continue to support you,” DeVos told the graduating class against chants and booing. “I am at the table fighting on your behalf, and on the behalf of all students [across] the nation.”

Throughout her time at the podium, students and audience members continued to boo, chant, and heckle DeVos. Even as she praised students for their hard work, pockets of the crowd chanted, as lone whistlers and shouters called out to education secretary. The crowd collectively booed again when DeVos said she would be visiting the old home and gravesite of their university’s founder later that day.

Administrators on the stage attempted to stand in solidarity with DeVos, clapping to show their support and silence the student’s protests. Early on, Jackson stopped DeVos’s speech to warn students that should they continue to disrupt her, their degrees would be mailed to them, a warning the students defied stridently.

In her speech, DeVos spoke about learning from the experiences of others as opposed to allowing differences to divide communities; the commitment of the graduating class, and individual stories of graduating Bethune-Cookman students and alumni; and honored students graduating from the college of education, much to the cheers and silence of audience members. However, DeVos ended her speech by encouraging “grace” within debate and decried political fights and immobile discourse taking place on cable TV and social media.

“We will not solve the significant and real problems our country faces if we don’t bring ourselves to a mindset of grace,” DeVos said, before quoting a verse from the book of Colossians. “Be wise in the way you act toward outsiders; make the most of every opportunity. Let your conversation be always full of grace, seasoned with salt, so that you may know how to answer everyone.”