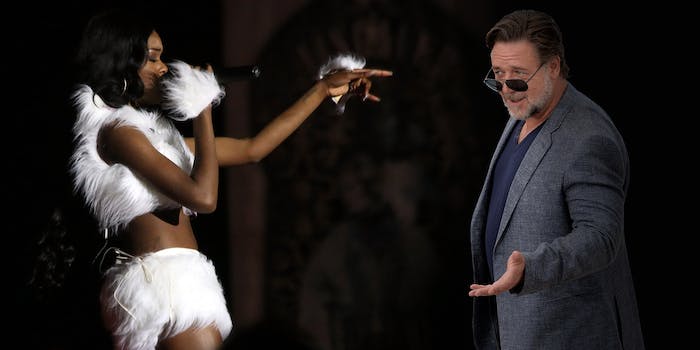 Azealia Banks says Russell Crowe choked her, called her the N-word at a hotel party

Her fans are calling for #JusticeForAzealia.

Something went down between Russell Crowe and Azealia Banks last night. According to Crowe, Banks was a disruptive guest at his party. But according to Banks, Crowe choked her and called her the N-word.

TMZ details how Banks was kicked out of Crowe’s party at a Beverly Hills hotel, which she attended as the guest of RZA. Banks reportedly called Crowe and another guest “boring white men” (where is the lie?), and made fun of Crowe’s taste in music. TMZ reports that Crowe “bear hugged” Banks to carry her out of the room, and multiple guests describe her as “erratic.”

However, Banks fans are calling for #JusticeForAzealia and sharing what appears to be a now-deleted Facebook post from Banks, which claims Crowe was abusive and racist.

Lord knows I've had my issues with her but this isn't right. This is a black woman who was racially assaulted by a man. #JusticeForAzealia pic.twitter.com/0urMmGb35k

Banks allegedly claimed that Crowe “called me a n*gger, choked me, threw me out and spat at me.” The post has been deleted, but one currently on her Facebook page simply reads, “I have receipts. Stay tuned.”

Both Crowe and Banks are known for public altercations and causing controversy. Crowe has been involved in a number of public fights and was charged with second-degree assault in 2005 after he threw a telephone at a hotel concierge. In another altercation, he allegedly called the New Zealand Warriors rugby team, many of whom are of Maori descent, “a bunch of coconuts” and “darkies.”

Azealia Banks was recently suspended from Twitter after sending racist tweets to former One Direction member Zayn Malik and offended many by using the word f****t.

Crowe also retweeted the original TMZ story, but we’ll update if and when Banks drops those receipts.

Update Oct. 20, 3:17 pm CT: Rza responded to the incident in a post on Facebook, in which he called Banks’ behavior that night “obnoxious” and “erratic,” and that he never heard Crowe call her the N-word.