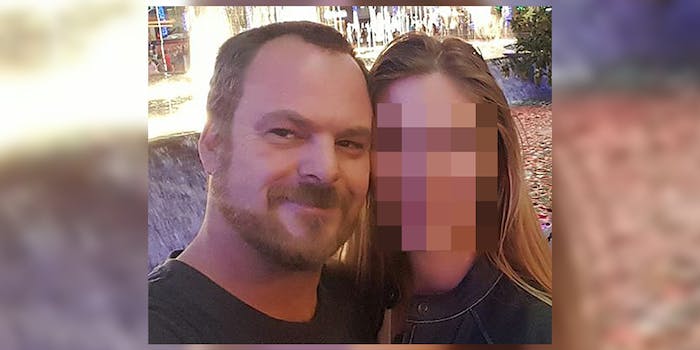 Arizona resident James Cobo is proud of his lifted truck, which he calls “trumper.” But after threatening to use “trumper” to plow over anti-Trump protesters, Cobo lost his job.

Cobo made a post on the Protest Trump Downtown Phoenix event page earlier this week, calling the event’s attendees “pathetic” and saying that he would “drive through” protesters with his vehicle. The protest featured a sizable group of people, making Cabo’s post particularly reminiscent of activist Heather Heyer’s death in Charlottesville, Virginia, who died after a man drove his car into a crowd of counterprotesters marching in opposition to a white supremacist demonstration in the town. Another 19 people were injured as a result.

“You are all pathetic. Can’t wait to drive through,” he wrote. “4×4 with push bumper will be sweet in this crowd. I named my lifted truck ‘trumper.'”

Cobo was posting from his Facebook account, and his online footprint was easy to track down. It didn’t take long before his employer, repair shop West Valley Tires, learned about Cobo’s comments. West Valley Tires posted a response to Cobo’s statements on Wednesday, revealing that Cobo is “no longer affiliated” with the company.

“We were recently made aware of an employee that posted outrageous posts and videos that are in no way affiliated with the positive views, values, and appreciation we have for people in our community and throughout the world,” the shop wrote on Facebook. “That person is no longer affiliated with West Valley Tires Point S.”

Even though he lost his job, Cobo feels no remorse for his actions. He has since bragged to the Arizona Republic that he received a new job. He also argued that he “never hurt anybody, nor did I have the intent to.” Instead, Cobo said, he just wanted to make protesters feel scared for their lives.

“I was poking at them, trying to get a reaction like they do to the Trump supporters,” Cobo explained to the Republic. “Just hurt feelings like they do to everybody that doesn’t feel the same way they do about life.”

Cobo even went on to blame Heyer for her own death, arguing that she “played in the street” and was hit by a car as a result. Video of the man driving his Dodge Charger into the crowd in Charlottesville appears to show the driver intended to slam into the crowd of people.

“If you play in the road, you might get hit by a car. My parents taught me that when I was little,” Cobo said. “Now, her family has $225,000, because she played in the street, and people feel sorry for her family.”

Cobo is referring to a GoFundMe memorial fundraiser setup by Heyer’s family, which raised $224,720 before its completion. Cobo also criticized protesters for getting “what they want” by protesting. He thinks the protesters’ actions go against America’s values.

“The only thing that upsets me about this situation is that adults are able to throw a tantrum and raise hell and get what they want by doing so,” Cobo told the Republic. “This is not how America is supposed to work.”