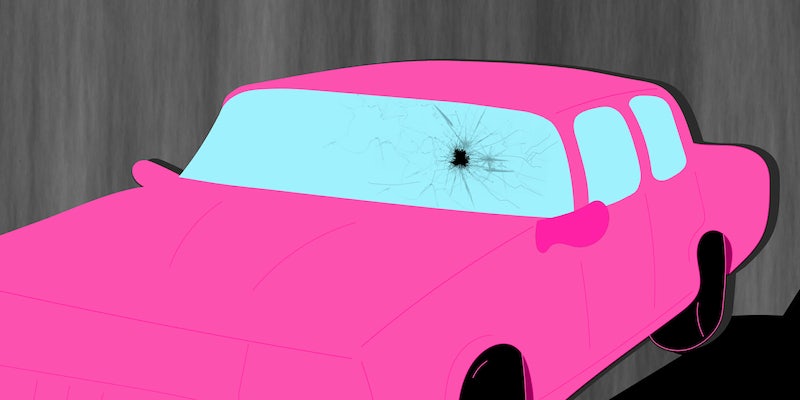 The look of violent men

The target of male rage is often women—and that's unacceptable.

With a cigarette dangling from his lip, the strange man pointed a gun squarely at my face.

“I’m not afraid of your stupid gun,” I thought, laughing a little and firmly gripping the steering wheel as I sat on Sunset Boulevard. I had lightly honked at him as he swerved out of a gas station parking lot into traffic, narrowly missing my front bumper. And now he had stopped his car, forcing mine to a stop as well. He was turned around in his driver’s seat, waving his weapon at me. Even with the windshields between us, all I could see were his eyes flashing with rage.

A burst. Another burst. Eight bullets total left his gun.

Fiberglass shards from my windshield dusted my shoulders and hair. One bullet punctured and bounced off the headrest beside me. Still, my gaze never left his eyes. I wasn’t going to give him the satisfaction. I had seen this look from violent men before.

As quickly as he escalated, he decided it was over. He turned around, kicked his car into high gear, crossed three lanes of traffic, and merged onto the freeway. I never saw him again.

“Do you have ‘beef’ with anybody?” the first officer on the scene asked me as I got out of my car. “No,” I told him, thinking how I wish I could explain away this senseless act of violence as a disagreement with an acquaintance. As a 29-year-old freelance writer in Los Angeles who spends her days rarely leaving her one-bedroom apartment outside of running an errand or going to the gym, I was confident I hadn’t pissed off anyone that much. The only explanation I could come up with was that I had made the grave mistake of driving while female.

I own a Fiat 500—the adorable, J.Lo-marketed, egg-shaped vehicle that was voted “Sexiest Car” by women in 2008. Jalopnik has called it “overtly feminine,” and one man, on a thread on car blog Piston Heads, dared to ask, “Can a Fiat 500 ever be a bloke’s car??” The answer to that question comes in loud and clear whenever my boyfriend drives mine. “People tailgate me, cut me off, and honk twice as often. When they pass me, they’re always surprised it is a man driving the car,” he once told me. But I didn’t buy my Fiat for its gendered sex appeal; I bought it because it was cheap and small enough to parallel park in L.A.

The detectives continued to question me, insisting I wasn’t victimized just because I’m a woman. “He probably just got spooked,” one speculated.

I went home, took a shower, and spent the day watching #MeToo status updates from female friends populate my feeds. Countless women testified to the times they had suffered because of the imposition, rage, and domination of men. It wasn’t until two weeks later, when I received a call from a detective, that my suspicions were validated.

The attack was premeditated. Security footage showed the man sitting in the gas station parking lot well before making his move. “He was waiting for someone, someone like you,” the detective said. My feminine car, my skimpy gym clothes, and lack of a male passenger screamed “vulnerable young woman.” There was nothing I could have done differently. To the officer’s dismay, this wasn’t as enlightening a moment for me as it seemed to be for him.

I wasn’t at all surprised.

The look I had seen on my attacker’s face was very familiar. It’s a look that says, “I’m going to put this bitch back in her place.” It’s the only visual cue we have before a man acts in irrational rage.

I had seen it when I was 18. My high school boyfriend tried to hit me with his car after dropping me off. I had hesitated when he asked if I was cheating on him (I wasn’t). I had seen it four years ago when a man I was dating put his hands on my neck and threatened to kill me during a fight about bills and money. I am the one in four women who have experienced severe violence by an intimate partner and I am fortunate that neither of those men owned a gun.

I asked Dr. Dewey Cornell, professor of education at the Youth Violence Project at the University of Virginia, if there is a correlation between “a look” man gives and the violent act that follows. Often, the signals of violent actions happen way before an incident occurs, he says, and are usually noticed by family members, friends, and coworkers. In other words, there is already a pattern of anger in the way they handle situations—and then it escalates.

Cornell said when men are distressed over a breakup, for example, they “develop feelings of anger, rejection, humiliation, and desperation that they find intolerable. Our society does little to help them cope and expects men to just get over it on their own. We pay the price when many of these men resort to violence.”

If we need further evidence that men under distress—men who have never had healthy feelings about women—take their rage out on strangers, look no further than mass murderers. Less than a month after my attack, a gunman opened fire on a Texas church, killing more than two dozen people in the worst mass shooting in the state’s history. The shooter, Devin P. Kelley, had a history of domestic violence, which included strangling his wife.

In fact, nine of the top 10 most deadly mass shooters in modern America committed violence against women, threatened violence against women, or disparaged women. In Everytown for Gun Safety’s exhaustive study on 156 mass shootings between 2009 and 2016, 54 percent were related to domestic or family violence. Men with a history of domestic violence are five times more likely to murder an intimate partner when a firearm is in the house.

It’s clear: Violence against women starts with men learning that it’s acceptable to hate women. It continues when we dismiss men’s angry outbursts as men being men. And it can end with a look of rage and a gun pointing at a woman’s face like mine.

But I know how I felt. His power was a gun and he carried it around with him to make him feel more like a man. My power was earned in my 29 years of being a woman, of dealing with similarly ridiculous instances of male fragility every single day.

And on that day, I decided that I would not give him the power. I had survived this look twice before, and I thought I’d roll the dice again. I was lucky, thankfully lucky.