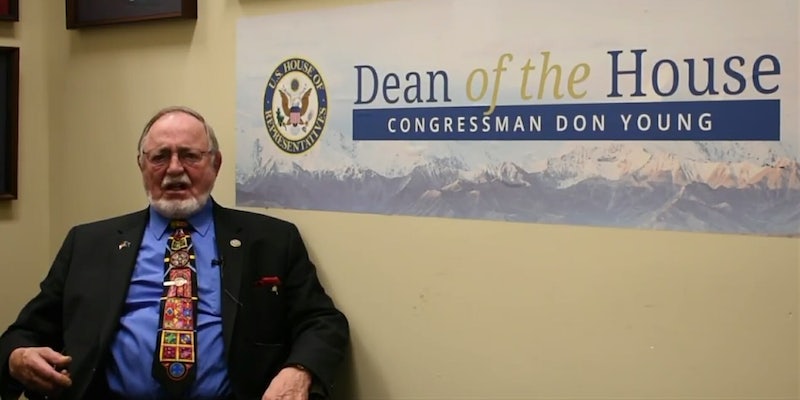 The internet points out this is not only offensive but misinformed.

Rep. Don Young (R-Alaska), the current longest-serving member of House of Representatives, is facing severe backlash for claiming that European Jews could’ve stopped the Holocaust by having guns.

Young’s comments came during a meeting at the Alaska Municipal League in Juneau last week. After Dimitri Shein, a candidate for the Democratic House primary, came to the meeting and asked Young about his views on ending school shootings, the U.S. representative unsolicitedly brought up Jewish deaths under Nazi Germany to make his point.

Young’s passion for the 2nd Amendment seems to be blinding his grasp of history. Armed Jews did resist the Nazis during the Warsaw Ghetto Uprising, and despite the fact that they fought off SS troops for a month, German forces gradually crushed the city’s resistance and destroyed its Great Synagogue. 7,000 Jews reportedly died and approximately 50,000 were sent into extermination or labor camps after the Nazis overcame the rebellion. So, no, arming the Jewish people with pistols and assault rifles wouldn’t have stopped the Nazis from enacting genocide.

That isn’t Young’s only ridiculous claim, either. He blames mental illness and violent video games for American mass shootings, calling on Alaskans to look at the modern “family structure” as a source of the problem. He also believes Alaska should embrace “guns on teachers,” despite the fact American teachers actively reject the idea.

“Have any of you seen some of those video games?” he said in a recording by Shein. “Have you watched what they’re watching? It is the worst I’ve ever seen. It’s violent beyond anyone’s imagination.”

Young has since faced a sizable online backlash, particularly from Jewish Americans. That’s because many American Jews were either forced to flee from the Nazi war machine during World War II, or outright lost relatives due to the Holocaust. Others, such as Daily Kos Political Director David Nir’s father, even served in the Warsaw Uprising.

Fuck you, motherfucker. My father, from the time he was an 11-year-old boy, was hunted as human prey for four years. You think a gun would have made a difference? Seriously, fuck you. https://t.co/sl63IlZXpA

I knew your father, @DavidNir . This brought tears to my eyes.

“How many Jews were put in the ovens because they were unarmed?”

“Get my family’s genocide out of your mouth and find another way to advertise your status as the second most NRA-funded member in Congress.” pic.twitter.com/2sObkRc8gK

They had guns in Warsaw.

This argument is not only offensive (cuz it presupposes that the Holocaust was partly the victims' fault), but nonsensical. The Nazis were the pre-eminent military machine of their time. They defeated standing armies. They were only going to be stopped by a more powerful army.

Young certainly is no stranger to controversy, and this isn’t the first time he has been called out for his behavior. He previously lashed out at Rep. Pramila Jayapal (D-Wash.) on the House floor during a government spending debate, calling the then-51-year-old a “young lady” who “doesn’t know a damn thing.” Young later apologized, explaining that he gets “very defensive about my state.”