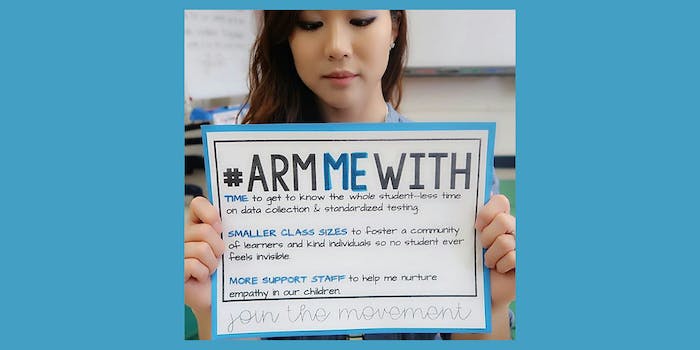 Weapons are not going to fix broken learning environments.

In the wake of the Parkland high school shooting, President Donald Trump and the far-right have argued that teachers should be armed with guns to protect their students. However, American school teachers disagree, and are turning to Twitter and Instagram with the hashtag #ArmMeWith to show what they’d rather have instead of weapons—vital tools like better classroom resources, educational funding, and mental health support networks.

The hashtag, according to BuzzFeed News, was started by curriculum and instruction doctoral student Brittany Wheaton and middle school English teacher Olivia Bertels. The two women have significant followings on Instagram, so they decided to use their social media power for good by creating a hashtag where teachers could “demand their voices be heard” regarding guns in the classroom.

“If you’re an educator, you know that [more guns] is not a solution to stopping the violence that’s happening in our schools,” Wheaton told BuzzFeed News. “Knowing that, I decided to start the #armmewith movement, where ACTUAL teachers give their solutions to what’s happening.”

#armmewith the resources and funding needed to help students experiencing mental health issues, NOT guns. Teachers, now (more than ever) is the time to take and stand and say we will not accept another one of our students being lost to another senseless school shooting. We have to strive for MORE. Our students deserve it. Call, write, march… do whatever you can to show enough is enough— we NEED stronger gun laws, we NEED funding for mental health issues, we NEED our students to L I V E so they can change the future of this country. #resist #standup #guncontrol #enoughisenough #notonemore #gunsafety #schoolsafety #mentalhealth #teachertribe #iteachtoo #teachersmatter

R E A L • W O R L D • S O L U T I O N S • my friend @thesuperheroteacher and I think that we should find more practical solutions than giving teachers guns. I hope you’ll take the same stance and read the explanation on my stories as to why. Join us. #armmewith

It’s an open secret that public schools struggle with providing supplies, resources, and support services for their students. More often than not, teachers end up footing the bill for hundreds of dollars worth of supplies, and most school districts lack the sheer staff numbers necessary to give students the proper mental healthcare they need.

Not just that, but low property tax in segregated areas along with underfunding from state and local governments mean many areas predominantly populated with people of color tend to suffer from a lower quality of education, a report from Complex reveals. These schools don’t need guns, they need better social support structures to keep kids learning, engaged, and able to work through life crisis outside of school. Free lunches, not armed teachers, will keep these students alive and thriving.

Rachel Ells, a social science teacher and student leadership instructor from the Santa Ana Unified School District, stressed that guns don’t belong on teachers’ desks at school. She told the Daily Dot that the classroom should be a safe haven for students, especially for kids that deal with gun violence back home.

“I went to college to become a teacher to teach, not carry out the Second Amendment,” Ells told the Daily Dot. “Many of my students come from neighborhoods where gun violence is a reoccurring event. Schools should be a place of comfort, security, and love to allow students to escape the harsh realities of their neighborhoods.”

More than anyone else, teachers understand what their students need to succeed in the classroom. Perhaps educators should be leading the discussion on gun control in American school systems, not the NRA.

“We know our students. We know their needs and we know that their safety is number one,” Ells continued. “We see our schools lacking mental health professionals and restorative justice practices. We see students emotionally and socially struggling, but with so few resources available to them we are not able to meet their needs. Placing guns in classrooms does not solve the root of this problem. More money allocated to education is needed in order to effectively support all students mentally and academically.”

This teacher Instagram community is amazing! I am so proud to stand beside my fellow teachers who will fight to ensure that guns are not placed in the hands of teachers. Our schools lack counselors, restorative justice professionals, psychologist and many other necessary positions due to the lack of funding. #armmewith more resources, professionals and time to spend with my students so that I can actually build meaningful relationships♥️

#armmewith #neveragain #notonemore Let’s unite to protect our children, our students, and ourselves. We can create change! We shouldn’t have to teach in fear. School shouldn’t be a scary place. Teachers shouldn’t have to think of exit strategies instead of learning strategies. #nomoreshootings #teachersunited #parkland @thesuperheroteacher @missbertels_

This certainly isn’t the first time teachers went viral for pointing out the public school system’s abysmal state in America. One Oklahoma teacher was forced to panhandle to pay for supplies for her classroom, only to learn that she made more money begging at an intersection than she did teaching. With any luck, #ArmMeWith will raise awareness so teachers can properly do their jobs without worrying about paying for a gun, too.

“When the school and community are connected, great change can occur,” Ells said. “As Nelson Mandela said, ‘Education is the most powerful weapon which you can use to change the world.'”