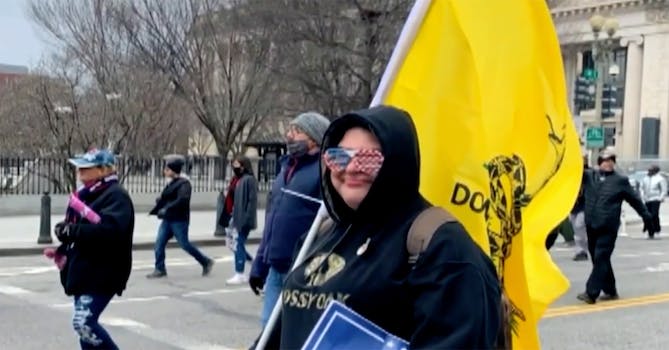 The friend who accompanied her to the Capitol blames antifa.

Newly emerging details from Wednesday’s U.S. Capitol riot in Washington, D.C. that left five people dead included a cruelly ironic one—a woman who died in a crowd stampeding to enter the Capitol was carrying a “Don’t Tread on Me” flag.

According to a news report from CBS 46 in Atlanta, 34-year-old Rosanne Boyland of Kennesaw, Georgia, had traveled to D.C. with a friend, Justin Winchell, to attend President Donald Trump’s “Save America” rally.

The two of them went to the Capitol after Trump’s speech, following his advice to cheer on the lawmakers supporting his efforts. According to Winchell, Boyland was trampled in the crush of people attempting to breach security to enter the building.

CBS 46 said Winchell noted that a few demonstrators began pushing people. “They basically created a panic, and the police, in turn, push back on them, so people started falling,” he explained.

The report then described the crowd as “clashing with police, trampling over one another, pinning Boyland to the ground.”

“I put my arm underneath her and was pulling her out and then another guy fell on top of her, and another guy was just walking [on top of her],” Winchell told the reporter. “There were people stacked two [to] three deep…people just crushed.”

Despite the tragedy that cost his friend her life, Winchell didn’t blame Trump for what happened when the reporter put that question to him. Instead, he shifted the blame to “antifa” and other instigators.

“She was killed by an incited event and it was not incited by Trump supporters,” Winchell asserted.

The “Don’t Tread on Me” flag, more formally known as the Gadsden flag, was originally a symbol of the American revolution, but has more recently been adopted by Tea Party supporters and Second Amendment advocates. A February 2020 Daily Dot article noted that it has achieved meme status, “inspiring parodies that range from pointedly political to purely absurdist.”

A tweet from Daily Beast reporter Will Sommer, which included a photo of Boyland with her flag, noted, “The woman trampled to death in Congress was ‘consumed with QAnon,’ making her the second confirmed QAnon supporter to die in the riot.”

As the Daily Dot reported Thursday, Ashli Babbett, who was shot and killed at the Capitol the day before, “expressed fervent support for the QAnon conspiracy theory movement on social media, tweeting and retweeting several messages suggesting that Democrats would face a reckoning when it came time to certify President-elect Joe Biden’s Electoral College votes in Congress.”

CBS 46 noted he acknowledged, in a prepared statement, that his sister-in-law was “really passionate about her beliefs,” but still felt there should be repercussions for Trump’s actions.

“I’ve never tried to be a political person but it’s my own personal belief that the president’s words incited a riot that killed four of his biggest fans last night,” Cave observed. “I believe that we should invoke the 25th Amendment at this time.”