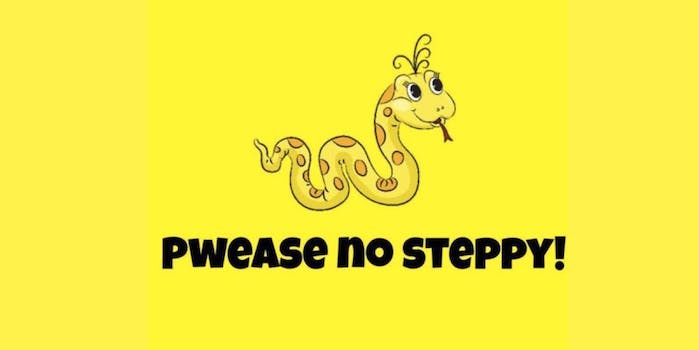 How's that whole 'refusing to be tread upon' thing working out?

The Gadsden flag—the yellow one, featuring a coiled snake and the slogan “Don’t Tread on Me”—was a symbol used by the American colonial military during the revolutionary war. Today, however, it’s inextricably tangled up with the Tea Party and Second Amendment advocates. When two white supremacist shooters killed two Las Vegas police officers in 2014, they wrapped the bodies in a Gadsden flag.

In its way, the “Don’t Tread on Me” flag has become a meme, inspiring parodies that range from pointedly political to purely absurdist.

On Twitter, @Blueloid has collected some of the best. Many of them make fun of the flag-wavers’ spirit of childish contrarianism. Some mock their vocal whiteness. Still others goof on the design of the flag itself.

After @Blueloid’s collection started to go viral, others contributed their favorites. It’s insane how many of these exist online.

It’s worth noting that some of these are callbacks to another good meme, “Snek.” Snek’s combination of cute snakes and intentional misspellings mark a lineage shared with the once-great Shiba Inu dog meme, Doge.

Snek is precious. You certainly don’t want to tread upon Snek.

By infantilizing or otherwise mocking the Gadsden flag, its opponents aren’t just sticking it to those they disagree with politically—although that is one function of the meme. They’re also using humor to strip the snake of its fangs, refusing to legitimize the people who want to use it not only as a Second Amendment symbol, but as an icon for white nationalism or violent insurrection.

So, you know—watch your step.