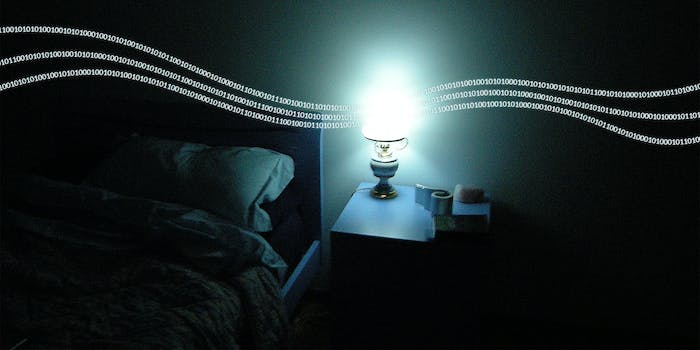 All of the lights: Will Li-Fi take over Wi-Fi?

Li-Fi internet is real, and it's faster than your router.

In the future, data could flow out of your $400 West Elm sconce like water out of a showerhead at speeds 100 times faster than WiFi. That is, if you’re using a technology called LiFi. “Li-Fi” stands for light fidelity and it’s likely to be the next stage in the natural evolution of in-home wireless internet technology. Before you throw your router in the trash, you should know what Li-Fi is, how it works, and if you can use it in the dark.

To understand Li-Fi, it’s important to understand how Wi-Fi gets internet and data to your devices. Basically, Wi-Fi uses radio frequency to transmit data from an access point (like a router), and the signal spreads out in a radius around that point. Li-Fi, on the other hand, is a Visible Light Communications (VLC) system. Meaning it that it uses visible light, like the bulbs we see above our heads, to transmit data. Signals transmitted using light are easier to focus and concentrate in one area, making Li-Fi potentially stronger and faster than our old friend, Wi-Fi.

How can data be transmitted over light?

In order to send data over light, Li-Fi relies on LED bulbs. LEDs, unlike halogens or other bulbs that have a “warm-up” time, can be switched on and off extremely quickly. So quickly, in fact, that the human eye cannot actually detect it. This flickering on is translated into actual data by special photoreceivers that receive light signals. Then, the signals convert data into streamable content.

So, if the LED light bulb has signal processing technology, it can send data embedded in its beam at rapid speeds to the receivers. The beam will contain rapid dimming and flickering (that we don’t notice) that can be converted into an electric signal by the receiver. This signal is converted back into a binary data stream such as a video, web, or audio file.

Look to your TV remote for an example of how you already use Visible Light Communications in your daily life. Even though you’re not transmitting a PDF to your TV, you’re using light technology to communicate that you’d like to turn it on.

Whose bright idea was LiFi, anyway?

Li-Fi, as we know it today, began taking shape around 2010. But the idea of communicating through visible light communications dates back to the 1880s. And it starts with Alexander Graham Bell. Bell invented a device called the “photophone,” which transmitted speech via flickers of sunlight over several hundred meters. This pre-dates the transmission of speech by radio if you had any question about Bell’s genius.

Bell was so proud of this invention that he insisted on naming his second daughter, “Photophone,” (his wife recommended they stick with “Marian,”) and even wrote his father, “I have heard articulate speech by sunlight! I have heard a ray of the sun laugh and cough and sing!” Unfortunately, widespread use did not take off due to interference from light-blocking sources and the rise of the telephone as the primary mode of audio communication.

Between 1880 and 2010, some advances were made in the way of light communication, but it was the efforts of Professor Harald Haas and his team at the University of Edinburgh who would begin to promote and commercialize Li-Fi tech for daily use. In fact, it was Professor Haas who coined the term Li-Fi in his 2011 TED talk titled, “Wireless Data from Every Bulb.”

Watch Haas’ Ted Talk, for example. When he puts his hand over the LED, the video on the screen stops playing.

Why is Li-Fi better than Wi-Fi?

Haas created his company, pureLiFi, because he believes that Li-Fi can solve Wi-Fi’s issues of energy efficiency, availability, capacity, and speed. Early testing of LiFi found that it is 100 times faster than existing Wi-Fi, including the high-speed Google Fiber. Another benefit to Li-Fi over Wi-Fi is it’s theoretically more secure. Visible light is much less susceptible to interference than radio waves, and Li-Fi signals can’t penetrate walls.  Meaning, it’s harder for neighbors to get on your internet without paying for it. Should Li-Fi become a global phenomenon, it will reduce energy usage by allowing LEDs to be dimmed for slower speeds.

Can you use Li-Fi in the dark or outside in the sun?

The main misconception about LiFi is it won’t work with the lights off. However, pureLifi maintains that their technology allows signals to be sent with light visibility down to 60 Lux. You may not be able to perceive that the lights are technically on, but they are. In direct sunlight, Li-Fi can work through a filtering process that allows the receivers to only use signals from the LEDs and not from the sun.

Excessive light pollution comes to mind when thinking about widespread adoption of LiFi. Adding more LED brightness to the time we already spend looking at screens isn’t great for our eyes, especially if those LEDs will technically never be off. The other main issue: Sightlines. In the same way that you can’t turn your TV off from the other room if there’s a wall in your way, you may not be able to receive internet service if there’s a wall between you, your light and your LiFi receiver. Finally, research about the potential health risks of spending hours underneath perpetually running LEDs is limited. One study, published in Scientific American found that LEDs contain high levels of arsenic and lead leading to significant “cancer and noncancer potentials.”

The Future of LiFi

Last month, it was announced the Philips Lighting would be testing LiFi on an entire office in France, making it the first company to fully experiment with the technology. pureLifi also completed the world’s first Skype call on a Lifi-enabled mobile phone around the same time. Though they didn’t use the phone’s camera lens as a photodetector, as Haas hypothesized in his 2011 TED Talk, the call was completed using a large case around the phone to conduct the signal. Patents have been filed by several companies for LiFi application in the automobile sector, meaning that the technology could be used to increase road safety or communicate road conditions to traffic lights. But these are just patents and we may be a long way away from practical use.

For now, we should rest easy knowing that we don’t have to put LED bulbs in our bathrooms in order to listen to music in the shower. That lighting is just way too harsh for naked bodies.