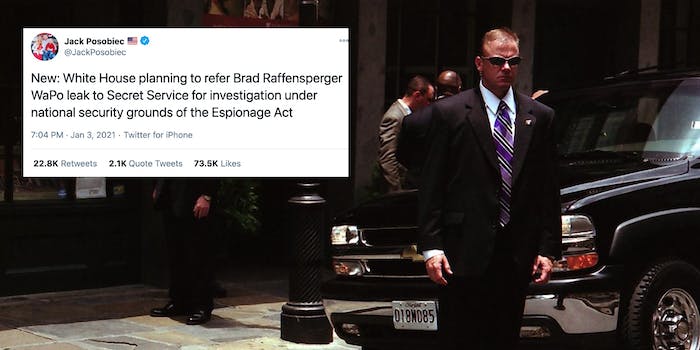 Supporters of President Donald Trump are convinced that the U.S. Secret Service is preparing to investigate Georgia Secretary of State Brad Raffensperger after a phone call between the two politicians was leaked on Sunday.

The conversation, audio of which was leaked to the Washington Post, revealed Trump had pressured Raffensperger to “find” votes in order to overturn his loss in the state.

Prominent pro-Trump conspiracy theorist Jack Posobiec has sensationally claimed that the matter will soon be investigated as a possible violation of the Espionage Act.

But Posobiec’s claim appears to be filled with numerous holes and fails to get even the most basic facts correct.

Steve Vladeck, a professor with the University of Texas School of Law, poured cold water on the allegation in a series of tweets.

“As someone who has studied and written about the Espionage Act for 15 years, lol,” Vladeck wrote. “And while I’m here, the Secret Service doesn’t enforce the Espionage Act; the Department of Justice does.”

Vladeck wasn’t the only one to push back on Posobiec’s remarks. Former FBI Special Agent Asha Rangappa likewise pointed out the inaccuracy in the pro-Trump figure’s comments.

“Except it’s the FBI, not Secret Service, that does espionage investigations,” Rangappa said. “And it’s not espionage. But other than that, have fun!”

The Espionage Act, originally passed in 1917, criminalized the unauthorized disclose of information related to the U.S. national defense.

As noted by Law & Crime, the claim that the leak of the phone call violated the Espionage Act is also questionable at best.

“Experts agree that revealing a phone call in which an outgoing president urges a secretary of state to ‘find’ votes intended to overturn election results does not constitute the kind of communication damaging to the safety of detriment of the United States,” writes Law & Crime journalist Elura Nanos.

That did not stop the report from spreading online.

The Daily Dot reached out to the Secret Service to inquire about Posobiec’s claims but did not receive a reply by press time.

Raffensperger addressed the call on Monday and asserted that his office would not launch an investigation into the leak.